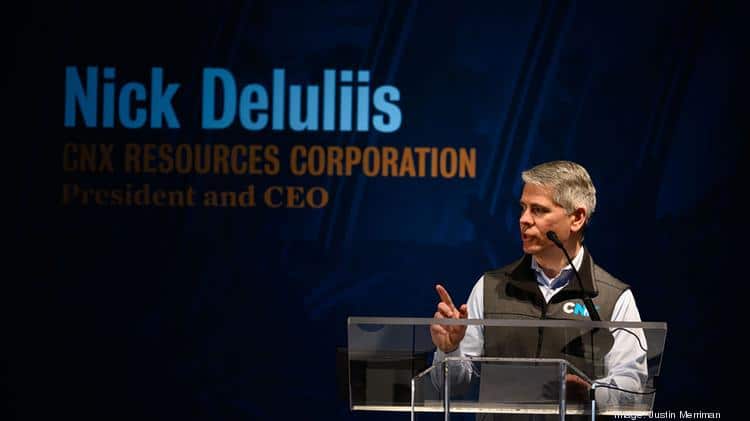 Two chemical company CEOs and the head of a major local natural gas producer differed Thursday over whether the industry’s sustainability goals were attainable, a polite disagreement that showed a sharp division during an important national petrochemical conference.

CNX Resources Corp. CEO Nick DeIuliis, an increasingly vocal proponent of carbon industry, took aim at opponents of carbon-based industries including manufacturing and natural gas production in recorded remarks Thursday to the Petrochemical Development USA conference. He said a zero-carbon future was a myth and called “outlandish” any claims from companies about their moves toward the zero-carbon future.

“When you hear a CEO of a public company talking about a zero-carbon emission or footprint, press them on that. How are they going to do that,” DeIuliis said. “Where’s the math that shows that? Where’s the technology and what costs are you incurring to be able to do that?”

In the two recorded presentations just before DeIuliis, Lanxess Corp. President and CEO Antonis Papadourakis and Chemours President and CEO Mark Vergnano had done just that, setting up a disagreement in a brief live Q&A session between the three after the recorded remarks ended. Lanxess, a multinational company with $2.8 billion in sales and major operations in the United States, supports the Paris Climate Agreement and has committed to being climate neutral by 2040. It’s already reduced its emissions by 50% since 2004. Vergnano used his time acknowledging a new reality for chemical companies and a focus on sustainability.

“Everything is aimed at continual improvement in response to a world that demands more, not just from us, but from every industry,” Vergnano said.

The Q&A session delved further into the disagreement, with Vergnano and Papadourakis both acknowledging DeIuliis might differ but that they believe zero carbon was critical and that renewable energy and closed-loops were part of the solution. Vergnano is the chairman of the American Chemistry Council and Papadourakis, a chemical engineer, is also on the board. DeIuliis is also a chemical engineer who has held leadership positions at CNX (NYSE: CNX) and its predecessor company, Consol Energy Inc., for decades.

“I think the future for us is going to be no emissions,” said Vergnano. “So it’s not about low emissions, or regulatory emissions. It’s about how do you not put anything into the air and water, especially drinking water, that people don’t want to see. I think that’s the challenge that’s in front of us.”

DeIuliis, whose prepared remarks focused on nine points about the carbon industry, disagreed that renewable energy sources like wind and solar don’t have a carbon footprint. He said that the materials that make the equipment have to be mined, the products have to be manufactured and then transported across great distances, particularly from China.

“There is no such thing as true renewable energy. It just does not exist anywhere,” DeIuliis said. “All energy requires some activity, some impact, and some level of carbon intensity, when you run the math in an objective manner with solar and wind.” He agreed that not relying on one source is good for any portfolio but said the economics and science favored natural gas.

“Natural gas, I think, clearly comes out as a winner for a whole host of resons including, ironically enough, carbon intensity and also cost,” DeIuliis said.

Both Vergnano and Papadourakis, however, reiterated their company’s goals and their belief that reducing the chemical industry’s carbon footprint was the right thing to do.

“Clearly we feel very strongly about the climate and we believe in the science and we see what is going on with increased CO2 levels,” Papadourakis said. “We’re committed to the Paris Climate Agreement and we will pursue the solutions we can find to reduce our greenhouse gas emissions and come to a climate neutral state.”

DeIuliis said he agreed on the concept of sustainability in terms of efficiencies and minimizing environmental impacts. But he said corporate statements and plans were too vague. He challenged Vergnano and Pakadourakis to provide more details.

“I don’t see the roadmap as to how you get there under science and math,” DeIuliis said.

“We’d love to be able to sit down and show you that,” he told DeIuliis. “We’ve done the math.”

Papadourakis said carbon is a key component but the question is where the carbon ends up, in a part or component or into the atmosphere.

“We don’t say or aspire to have no carbon in our products,” he said. “What we’re going to do is not have carbon dioxide or greenhouse gases released into the atmosphere.”

The conference has grown with the new developments in the petrochemical industry in the Pittsburgh region, including the building of the Shell polyethylene plant in Beaver County and the potential development of others. The focus remained on the tri-state region of Appalachia in this year’s conference, including an update on the Shell plant as well as presentations by Shale Crescent USA, Pennsylvania’s governor’s office and JobsOhio.