The following is an excerpt of comments provided by Nick on Tuesday, November 29, 2022, at an open forum for Marietta College students. The event was part of the college’s Leadership Q&A series. 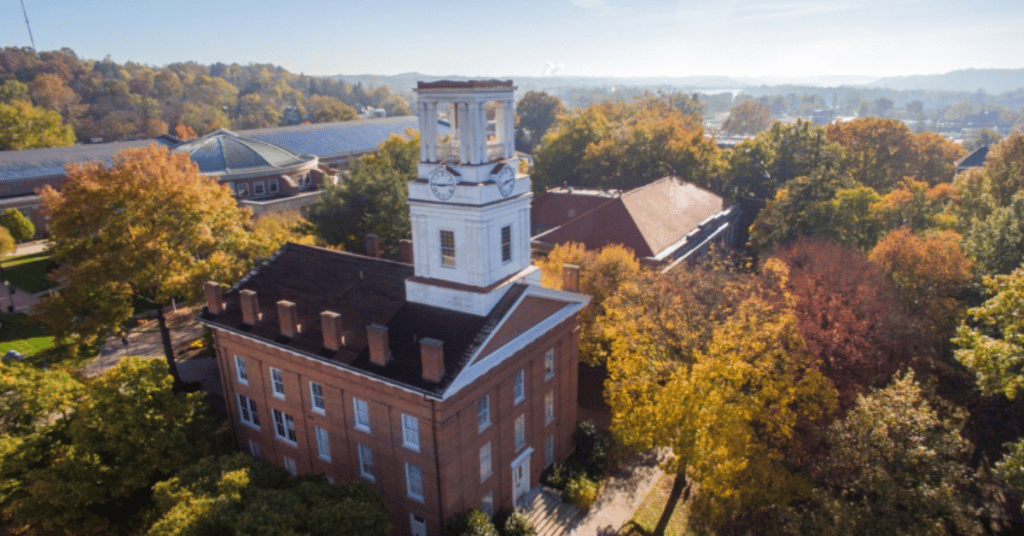 Faculty and students, let me start by saying that I’m very excited and also humbled to speak to you this evening.

Excited because I’ve become a huge proponent of advocacy; particularly advocacy of ideas, of policies, and of the role of vital institutions like this college. Humbled because it cannot be overstated as to the critical role that higher education should play in our society and in a republican democracy.

Let me tell you a little bit about my back story. I was born and raised in Pittsburgh, which in many ways is the capital of this great region of Appalachia. My family’s history was typical of the journey of many families in this region.

You know it well because many of you are from families who traveled it with your own special version. Families come from places all over, they arrive here with nothing in their pocket and armed only with their work ethic, the first generation toils in mines and mills and factories to provide a life for their families. Before you know it, in a generation or two, their children or grandchildren have ascended into the middle class or beyond. And are sitting in here tonight!

Amazing stuff, isn’t it?  Your family predecessors that made it all possible are smiling down on you right now with pride.

And that was my story, too.  My family came from Italy, worked in those mines and mills, my mom and dad entered the middle class with my father working in the steel mills until they shut down, and I became the first person in my family to attend college.

I attended Penn State and studied chemical engineering. Upon graduating, I had no idea what a chemical engineer did, but I was fortunate enough to have stumbled upon a great career opportunity in the energy industry way back in 1990. Yes, I am old!

The opportunity was working as an engineer at a predecessor company to CNX Resources, who I work for now.  The company was generous enough to pay for me to attend grad school at night while working.  I was able to earn an MBA, and later a juris doctorate degree in law, both at Duquesne.

At the same time, I was fortunate enough to have various career opportunities present themselves, while working in the energy industry for CNX.  I jumped from engineering, to managing engineers, to running a strategic planning effort, to becoming the CEO of a new publicly traded natural gas company, to becoming the chief operating officer and president of an energy conglomerate, to then becoming the CEO of one of the premier natural gas and pipeline public companies in the United States.

Now if you’re keeping score with that progression, and I seriously hope that you are not, you’d see that the career journey started at age 21 and is currently setting at age 54. Black hair to gray hair, and young to old.  I was lucky enough to find a partner and a spouse through that journey and we’ve raised five awesome kids who are now all young adults, four of them in the same boat as students here tonight. Amazingly, all of this occurred within a very tight radius within the city of, and southern suburbs of, Pittsburgh, Pa.

So, consider me a voice from thirty years into your future. You are exiting this fine institution and starting upon a career journey where you will ultimately navigate similar twists and turns that I have.

Considering we’re on a college campus, let me say that I’ve always been a bit obsessed and in awe with education and the educational system. What it represented. What it provided in terms of future opportunity. And what it was designed to be, compared to what it has become.

My parents, and particularly my grandparents, were huge advocates of that age-old saying that ‘education is the key.’ I am a living beneficiary of that view.  You are as well.

But I am a ‘worried man,’ to borrow the title of a Johnny Cash song.  Something is wrong today with our system of education. Our public schools are not teaching 4th graders, 8th graders, and high schoolers how to read and how to do basic math.  The data don’t just show it, the data assault you with that reality.

Colleges and universities are all too often jettisoning their duty to be the ‘marketplace of ideas’ and replacing it with a form of indoctrination that reflects an Iron Curtain of academia.  Instead of being taught how to think, how to express, and how to embrace debate, students in colleges today are often instructed on what to think, how to stifle expression, and to suffocate debate. You’re rewarded more for falling in line with the consensus instead of challenging the consensus, scientific consensus, or any other variety.

This borders on a crisis. You are fortunate and the lucky ones. You attend a college that has not succumbed to this crisis. But you are in the minority. Unfortunately, most college students today are subjected to a learning environment that is the antithesis of what our higher education system was designed to be when it comes to providing life skills and a legitimate rate of return on time, tuition, and investment.

Let’s make academia the marketplace of ideas once again.

How about some questions or thoughts?