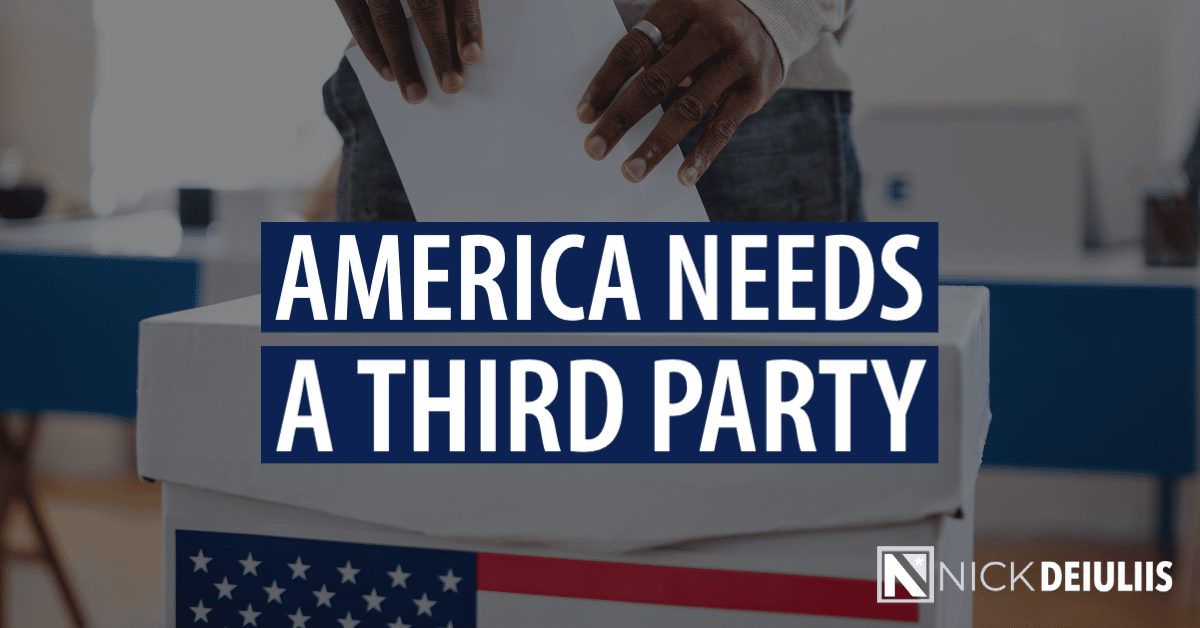 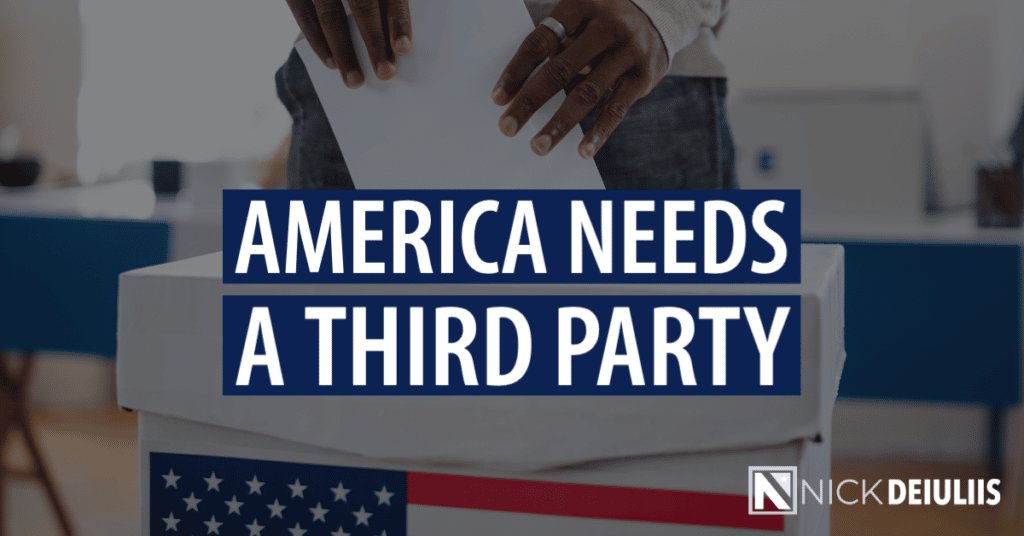 I’m a big believer in America; where it came from, what it stands for, and its future potential. The United States is far from perfect, in both its history and its present. Yet it still represents the best social, political, and economic system to respect and nurture the individual.

But most sense something is very wrong with where the nation is heading. Look around at our national political leaders from both parties of late, is the best we can do? America needs a course correction.

Drastic change is not needed. The nation should not radically tear itself down and then rebuild itself into something perceived to be better abstractly but likely will be much worse. Keep the Electoral College, don’t stack the Supreme Court, defend the Bill of Rights, and preserve the free market.

But our political system is in dire need of new blood. Two parties have enjoyed a stranglehold on governance for too long. Where they were once different shades of similar ideals, today the two parties have split orbits to where they represent extremes that cater to the minority fringes and leave little for the large middle.

Primaries are mostly to blame for the current polarization of the two-party power cartel. A moderate Democrat has no chance when running against a proud leftist in a primary. A traditional Republican today may be dead-on-arrival when going up against a hard-right opponent.

The opposing party funds this dynamic, making it worse. How many times in the past decade have we seen one party funding commercials for the other party’s most extreme candidate in the primary election? The hope, of course, is that the extremist wins the primary, which will make it easier for the opposing party’s extremist to win the general. Experience has shown the logic works.

The dynamic also creates a talent drain in candidates. Many moderates with distinguished careers in politics have decided to step down rather than face a primary drubbing. Too many high-potential candidates never start political careers because of the radicalization of the primary party process.

When candidates representing the extremes of each party prevail in the primaries, the choices in the general election leave much to be desired for moderate voters. If a moderate wants their vote to count and voice heard, they must choose the lesser of two perceived evils.

That gives an advantage to the leftist Democrat candidate in the general election. The leftist promises the world to voters and lavishes special interests with handouts, from universal income to college loan forgiveness. It’s hard to run against candidates who act as a political Santa Claus, where every day is Christmas, and the credit card bill never comes due.

To vanquish such an opponent, one needs sound ideas and a sensible platform that appeal to run-of-the-mill Americans. That hasn’t exactly been the descriptor of many Republican candidates these days, who obsess on their own form of cultural control, just from a different direction than their leftist opponents.

Between primary and general elections, moderate voters are bombarded with shrill messages from each extreme side. Messages get amplified beyond the campaigns, because each end of the spectrum enjoys its own major media outlets who are more than happy to stoke the partisan flames.

The moderate voter sees two options as election day approaches: someone whose extreme leftist views disturb but who offers the voter free stuff, and someone else whose extreme hard-right views frighten and who offers no free stuff. The exhausted moderate often ends up voting for the former, or perhaps simply staying at home and not voting at all.

The fix to our current political conundrum is surprisingly simple. What we need today is a third national political party. One where the Constitution is respected, individual rights reign supreme, government is minimal but covers its necessary responsibilities, the free market is unshackled, and fiscal discipline is exercised.

That description fits neither the Democrat nor Republican platforms of today. And these two parties have enjoyed a stranglehold on the presidency since 1852. Perhaps it is time to shake things up and fill the great middle void space that many Americans associate with.

Choice is good. Three options at the ballot box are better than only two. Particularly when the current two have radically evolved to the extremes.
The best fit for a third choice is libertarian. There are two classic strains of libertarianism.

The first is the purer and more extreme, the Ayn Rand view. Where all government intervention is a form of coercion, coercion of the individual is immoral, and thus government tends to be immoral. Government is not to be minimalized as much as it is to be eradicated. Government should not prevent or subdue individual choice, even if such choice might infringe on the rights of others.

The second strain of libertarianism is more practical, the Milton Friedman view.[1] Where government should still be minimized to maximize freedom of the individual to choose, but where government protects the ability of others to do the same. Individual choice remains paramount, but it must not infringe on the rights of others to follow their own values.

This second strain of libertarianism, when properly framed, would be attractive to many moderate voters today. Government out of our bedrooms and classrooms, the state spending only what it takes in, the shrinking of the Orwellian administrative state, releasing the Darwinian free market, and protecting individual rights and the Constitution. 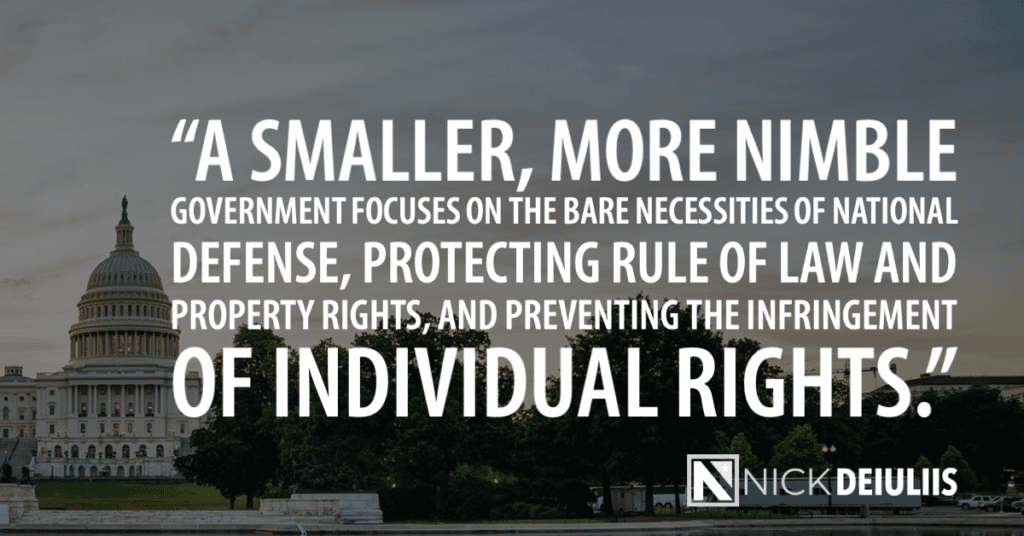 A smaller, more nimble government focuses on the bare necessities of national defense, protecting rule of law and property rights, and preventing the infringement of individual rights. Taxpayers realize an honest-to-goodness rate of return on their investment.

A third political party embracing a practical libertarian ideology would be an instant success in America. It’s not a break from western republican democracy, it’s a restatement of it. Many Americans would listen to the platform and rightly think, “well, yeah, isn’t that the way it’s supposed to be?”

Perhaps the biggest benefit to this third, new political party would be the inevitable moderation of the Democratic and Republican parties. The middle, a voiceless space today, would become relevant once again and demand that the extremes evolve toward the moderate middle or face the consequence of losing power.

A third party occupying the middle and embracing practical libertarianism would reform the primary election process without tearing it down. The leftist would struggle to make it through a Democratic primary. The hard-right nationalist is placed on the eccentric fringe of the Republican party.

Reasonable and compelling candidates organically sprout up from Republican and Democratic primaries. Coupled with the libertarian choice, citizens and taxpayers are in a better place no matter who prevails in the general election.

Cartels and Their Vacuums

Imagine if consumers had only two cola drinks to choose from, call them P and C. Over time, each option evolved to an opposite extreme. Brand P became laced with cocaine and extremely unhealthy, and brand C removed all sugar and caffeine to where it became nothing but tasteless, colored water.

If those two choices held cartel power and were protected from competition, no other product options would manifest. Many consumers would stop drinking cola beverages. If a new option was introduced with the features of what coal drinks used to offer, it would become an immediate commercial success.

Nature abhors a vacuum. But American politics have created an impressive vacuum and preserved it for too long. That’s to be expected with concentrated cartels, in business and politics. Time to break the cartel and create more choice.

Few of us desire to practice politics. But all of us want to choose from the very best of options when it comes to selecting our political leaders. That’s what the Founding Fathers envisioned and that’s what we deserve.

Let’s get what we deserve.