This June marks the 80th anniversary of the Battle of Midway—a battle that proved the turning point in the Pacific during World War II.  Over the past eight decades, historians have analyzed the decision making of the Japanese and American admirals while navies have studied the tactics of both carrier fleets. The consensus is that a few crucial decisions and a couple of vital hours in the four-day event swung the Pacific War’s momentum from Japan to the U.S., despite the Japanese enjoying superiority in carrier numbers and crew experience.

The Battle of Midway rightly captured the attention of those beyond war college instructors and military history academics.

Interestingly, one segment that may not have grasped the key takeaways of the battle is the business community. That’s a shame. Analyzing the Battle of Midway provides wisdom and insight for the modern business leader.

A closer look at Midway’s key teachings in the context of competitive commerce: 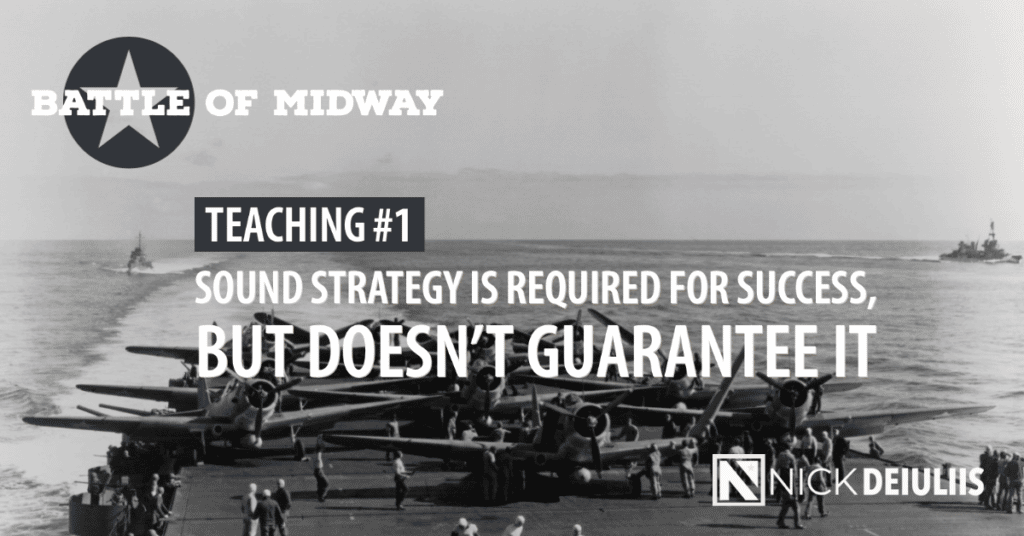 Midway Teaching #1: Sound Strategy is Required for Success, But Doesn’t Guarantee It

Japan’s Admiral Yamamoto took a broad, strategic view of the Pacific War.  Yamamoto knew Japan’s best chance at victory was to gain advantage over the U.S. Navy early and compel America to lose its desire to fight a protracted war across thousands of miles of ocean.  That strategy drove the planning for the Midway precursors—the surprise attack on Pearl Harbor and the Battle of the Coral Sea.

Yamamoto’s strategic vision also drove the planning for the Battle of Midway; he wanted to instigate a naval battle where the remaining U.S. aircraft carriers would be knocked out by the vaunted Kido Butai carrier fleet, hopefully resulting in the U.S. seeking peace or withdrawal from the western Pacific.  It was in many ways a perfect strategy.

Japan’s approach leading up to Midway provides two insights to business leaders.  First, strategy matters, and a rational, well-thought strategy should drive tactics.  Second, you may have a perfectly laid out strategy but fail miserably in the ultimate objective; good strategy is a prerequisite to success but does not guarantee it.

Both insights held true for Japan in the Battle of Midway and hold true in business.  Sound strategy is a must for business success, but it is far from a guarantee. 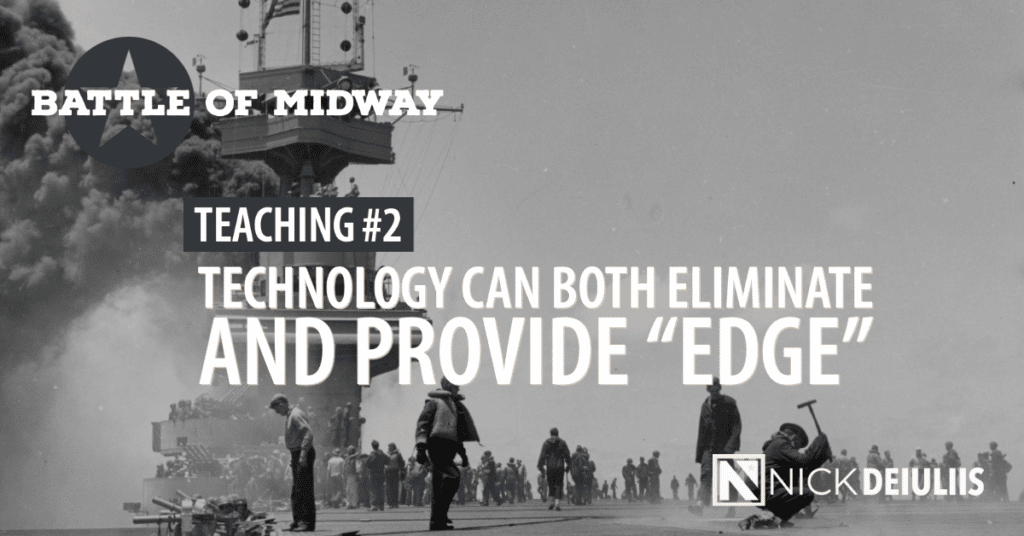 Teaching #2: Technology Can Both Eliminate and Provide “Edge”

Those familiar with the battle know the U.S. enjoyed advance warning of Japan’s target being Midway Atoll.  That’s because U.S. Navy cryptanalysts were breaking Japanese communication codes and knew weeks in advance that Japan was planning an attack in the Pacific, which the U.S. ultimately verified as Midway.  Admirals Nimitz and Spruance knew what the Imperial Navy planned before combat events unfolded.

Technology not only neutralized Japan’s strategic battle plans by eliminating the element of surprise, but it also flipped the advantage of surprise to the U.S.  The battle was not won solely by pilots and sailors in combat, but also by math majors working on codes at desks.

In business, technology can rapidly make the weak dominant and the strong obsolete. That holds true for companies, industries, and economies.  Taking the long view and investing the talent and resources into technology development and deployment can reap massive returns.

Just ask Amazon, Google, and Apple.  As well as their vanquished competitors such as Kmart, Lycos, and Blackberry. 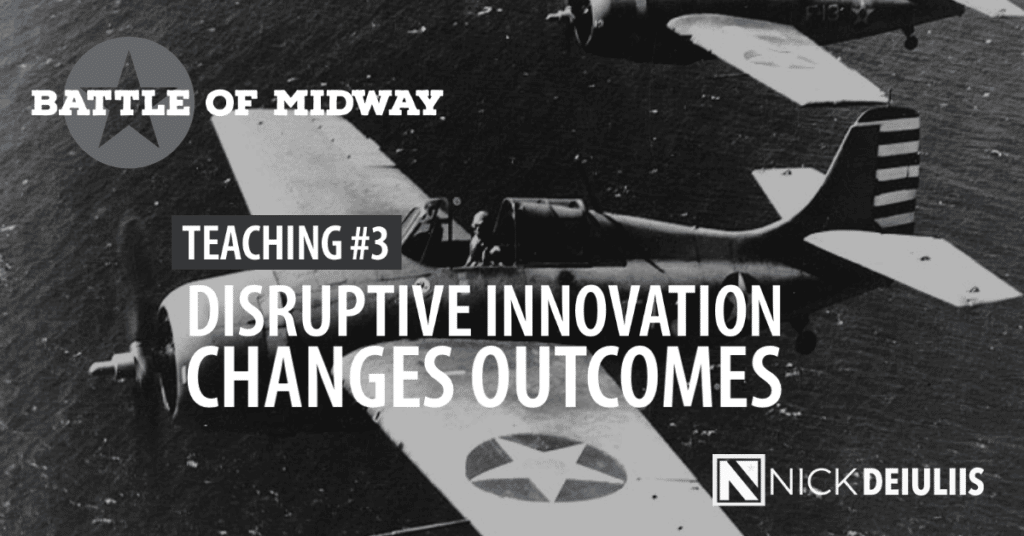 One of the American unsung heroes of the Battle of Midway is Lieutenant Commander John Thach, a fighter pilot behind the stick of a Grumman Wildcat.

Thach created and applied a new dogfight defensive technique, dubbed the Thach Weave. During the Battle of Midway the move proved highly effective against the until-then dominant Japanese Zero fighters.

The Thach Weave, which neither side’s commanders saw coming, had a multiplier effect on the battle’s outcome and reached far beyond the win-loss tally of Zeroes and Wildcats. It influenced precious timetables, the number of torpedo and dive bombers breaking through to attack carriers, and decision making.  Without the Thach Weave, the Battle of Midway may have ended with a very different outcome.

In business, disruptive innovation often appears unannounced and is the result of both trial and error as well as necessity.  One must be constantly on the lookout for its arrival as a potential threat that must be quickly acknowledged, and also willing to continually tinker under a sense of urgency to be the disruptor and innovator. 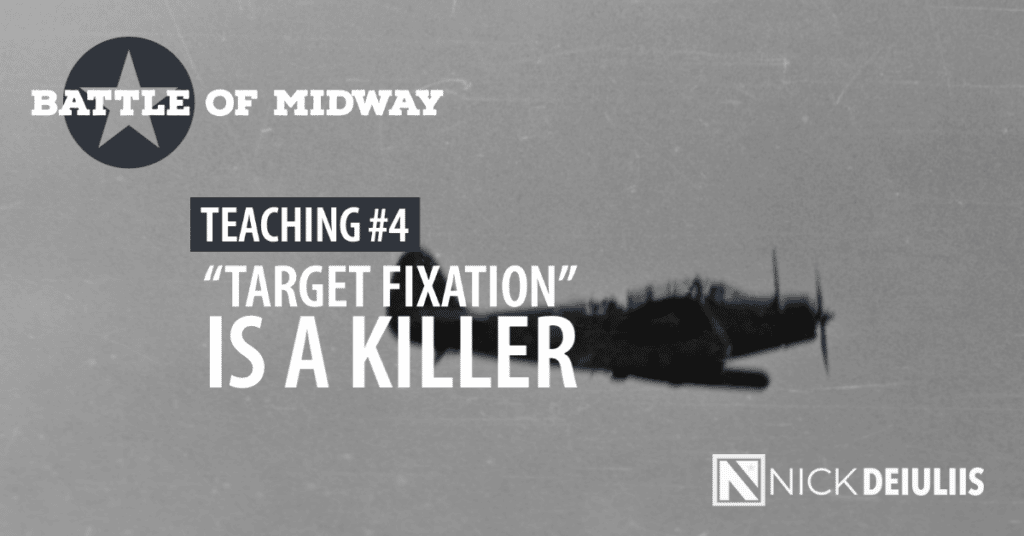 Teaching #4: “Target Fixation” Is a Killer

When the battle was still going relatively well for the Japanese, the Imperial Navy made a fatal error.  The Thach Weave not only proved highly effective in Wildcat dogfights with Zeroes, but it also allowed U.S. torpedo bombers to break through the initial Zero patrols to try to sink Japanese carriers.

The Japanese responded by committing all their patrolling fighters above the carrier fleet to engaging the U.S. Wildcats and torpedo bombers.  The Japanese became fixated on the visible threat developing to the northeast; to the point where they were willing to completely expose their carrier fleet to other threats.

After three hours of intense air combat, the Japanese downed over fifty American planes and lost only eleven of their own.  Even better for the Imperial Navy, there was not even a scratch on the four carriers (Hiryu, Akagi, Soryu, and Kaga).  Target fixation seemed to work quite well.

Target fixation in business can be lethal.  Pouring all your resources into a single threat, whether real or imagined, runs the risk of ignoring mortal dangers or squandering epic opportunity.  Some of those may make or break a business. 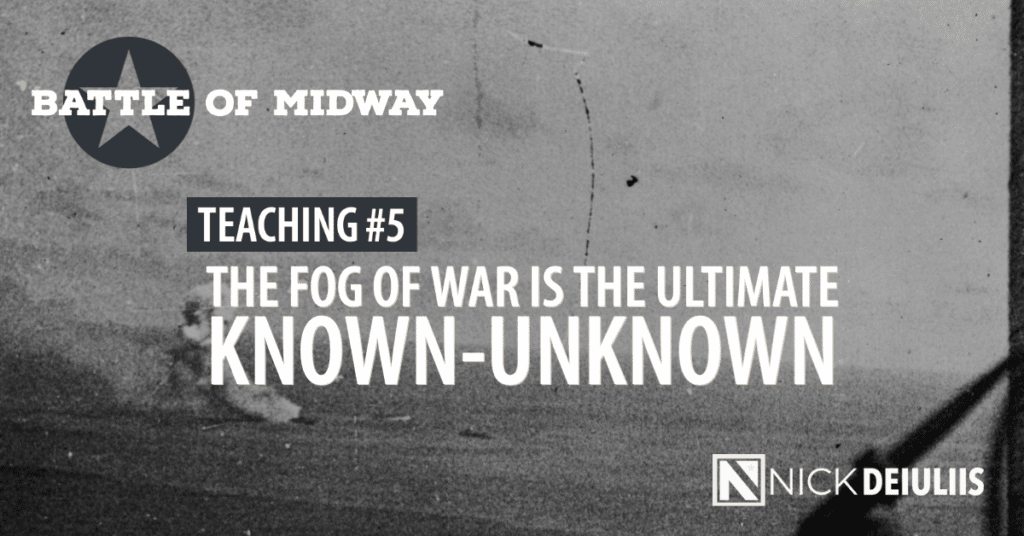 Teaching #5: The Fog of War is the Ultimate Known-Unknown

A military proverb says, “no plan survives contact with the enemy.”  Part of that adage’s wisdom reflects the reality of the fog of war.  The Battle of Midway had its share of fog of war, with the outcome influenced by which side managed their known-unknowns better.

Under the shroud of the fog of war, the Japanese had to contend with: their picket submarines arrived too late off the coast of Hawaii to detect American carriers sailing out to sea; they didn’t know where the American carriers were for much of the battle; they did not correctly identify a carrier once they located part of the U.S. fleet; the shocking appearance of the battle-ready carrier Yorktown after its mauling at Coral Sea ; and, they squandered an opportunity later in the battle when they mistakenly went after an already crippled Yorktown instead of the Hornet or Enterprise.

There is no doubt both sides were acting through the fog of war.  But the Americans did a much more effective job exploring and adjusting as the known-unknowns manifested, as evidenced by their location of the Japanese fleet early on (despite U.S. reconnaissance reporting only two carriers).  That made a huge difference in a carrier battle, where aerial reconnaissance is crucial.

In business, it’s not certain what competitors will do, how regulations may change, or what pending calamities are about to appear.  But recognizing such factors as known-unknowns and developing a team and processes to manage them puts you in a better position to succeed.  Ignoring the known-unknowns invites disaster. 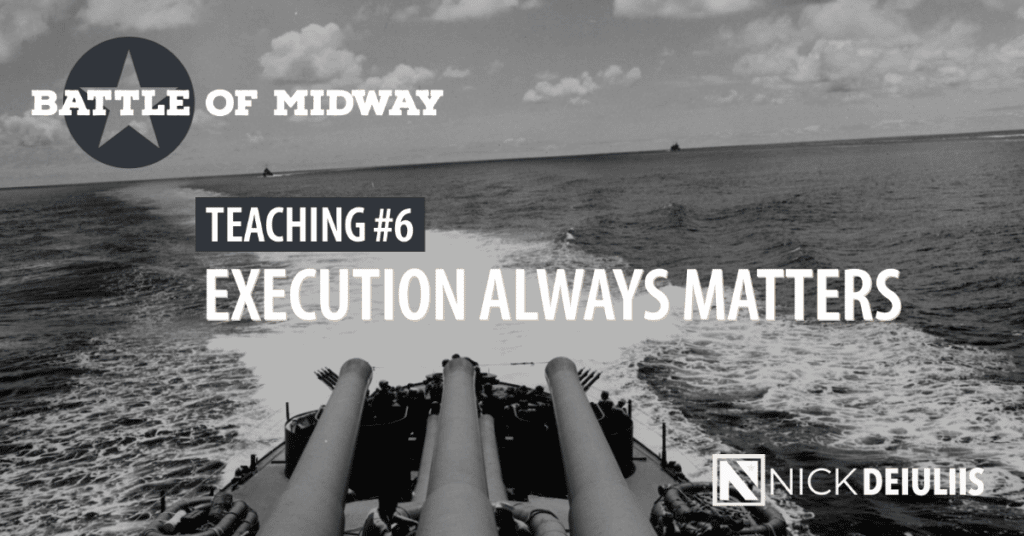 If Yamamoto devised a sound strategy, why did the Japanese lose the Battle of Midway and ultimately the war?  One reason is poor execution; despite the Imperial Navy’s reputation up until then for excellent execution—Vice Admiral Nagumo launched over one hundred carrier planes in ten minutes early in the battle.

Consider a few of the Japanese Navy’s execution blunders during the Battle of Midway:

Certainly the U.S. had its share of execution missteps, as evidenced by the near slaughter of its torpedo squadrons and the infamous “flight to nowhere.”  But Japanese missteps in execution of battle tactics and decision making proved a decisive differentiator.  Strategically, Japan achieved the tactical battle they wanted, but it lost in part due to poor execution.

A company must not only devise the proper strategy and employ the correct tactics, but it must also execute efficiently.  Execution is the necessary converter of potential value into tangible value. 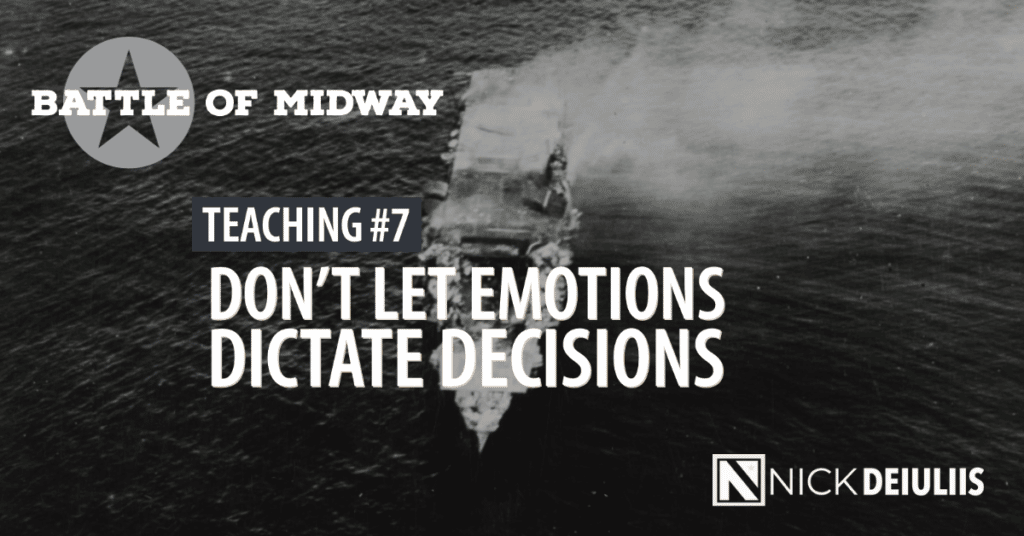 After the Kaga, Soryu, and flagship Akagi were devastated by American dive bombers, Vice Admiral Nagumo had a decision to make: withdraw to fight another day, or continue fighting to even the score?  The decision would need to be made with only one carrier still intact, the Hiryu, and with exhausted crews depleted from battle.

While a calm assessment of the situation would dictate ending the engagement, Nagumo chose to fight on. His decision was made largely on emotion, pride, and optics.  The thought of limping back to friendly waters down three carriers and with only one American carrier out of commission was unacceptable.

Allowing emotion to dictate decision making took a bad Japanese outcome and made it a disastrous one.  Further engagements resulted in the sinking of the Hiryu, while the Hornet and Enterprise remained intact.  Nagumo’s pride had a serious consequence for Japan.

In business, the prudent leaders play the long game, remain above the daily fray, and clinically follow the math.  Avoid the emotion when assessing things like acquisitions and growth.  It’s just sound business. 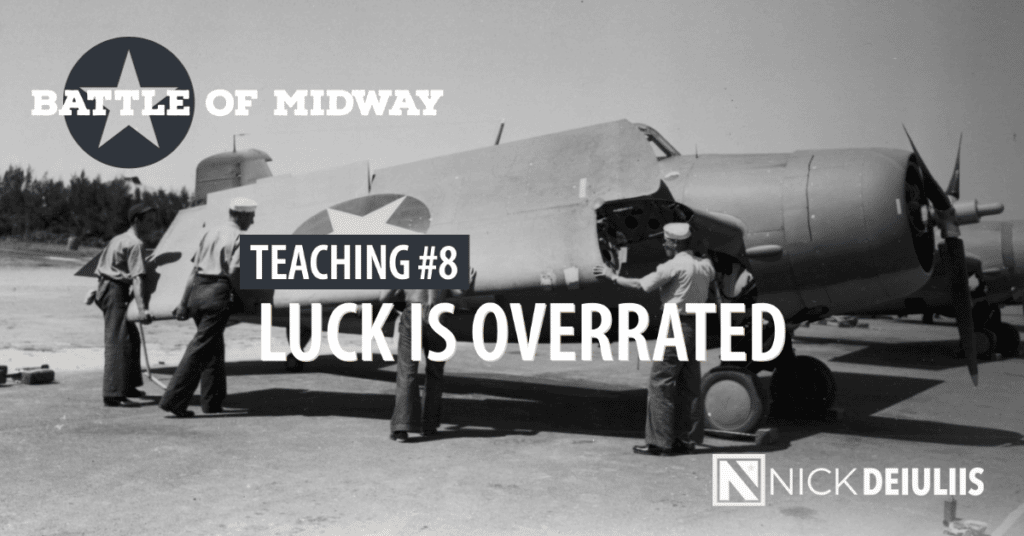 Following the battle and to this day, so many, from military experts to run-of-the-mill history buffs, commonly attribute Midway’s outcome to Lady Luck; Japanese reconnaissance planes missing U.S. carriers because of fortuitous cloud cover, U.S. reconnaissance planes going the extra mile and being rewarded with locating the Japanese fleet, American dive bombers appearing at just the moment when the carriers were left unprotected, and so on.

Attributing outcomes to luck is typically a sign of rash judgment and lazy analysis.  That’s because in war, business and life, to a great extent, one makes their own luck.  Midway’s outcome was certainly impacted by fortunate timing and close calls.  But both were the cumulative derivatives of the prior teachings discussed above.

You need to first perform the tough groundwork to ultimately place yourself in a position to be lucky.

The profit and loss stakes of business pale in comparison to the life and death stakes of military combat.  Yet there is much to be gleaned from studying battles and applying it to leadership, business, and strategy.

Perhaps an enterprising professor will find a way to bring the lessons of Midway into the minds of tomorrow’s executives.

Eight Teachings for Business Leaders from the Battle of Midway