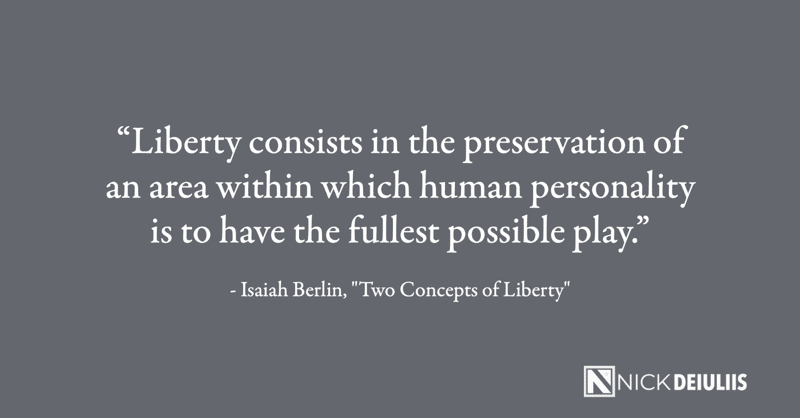 Today, the Left runs rampant through the corridors of government, academia, and treasured institutions.  It tramples over the individual and our Constitutional norms.  How did we get here?  The cautionary roadmap of the dubious journey was laid out decades ago by the great British philosopher Isaiah Berlin.  The path is best understood by Berlin’s two dueling concepts of liberty: negative liberty and positive liberty.

Berlin’s essay on the two competing types of liberty was delivered in a lecture at Oxford in 1958.1  Ironically, Berlin lamented during his prime how social and political thought in western democracies had fallen upon evil days.  He noted the alarming ease of how a professor’s abstract philosophical concepts would be weaponized by those looking to force rigid and life-stifling doctrines upon the masses.  Berlin had no idea how much worse things would get and would be shocked at today’s strict ideological environment that shackles the individual.

The Virtue of Negative Liberty

Negative liberty is the absence of obstacles, barriers, or constraints external to the individual. The person is free to choose their own way for their own good without obstruction from others.  They might make it big or fail miserably; but the doors in life are open to their choosing.  The individual is not dictated to and is left alone.

In Berlin’s words, we use the negative concept of liberty in attempting to answer the question: ‘What activities or areas should a person or group be left alone to do, without interference by others?’  Think of negative liberty as the absence of something: the something being external factors that will impede the person.  Negative liberty correlates to strong individual rights.

Negative liberty equates to the belief that it is better for a person to fail through their own volition than to succeed due to another’s benevolent control.  A person’s wishes are not to be frustrated by government.  Instead, they are to be respected.

The Opiate of Positive Liberty

Positive liberty is someone or something acting to take control of the individual’s life and to help realize the individual’s purpose.  We use the positive concept of liberty in attempting to answer the question of: ‘What or who may control or interference with someone to get them to do (or be) this rather than that?’

While negative liberty is attributed to individual agents, positive liberty is often attributed to collectivism or big government.  Someone or something must decide what is best for the individual and to place them on the right preordained path, whether it be a benevolent authority or an oppressive one.  People don’t know what is good for them; it is up to the state, bureaucrat, or despot to decide what is best for them.

But forcing or coercing an individual to conform their life to the view of another is a moral failing.  Thus, so too is positive liberty theory.  Immanuel Kant established the concept of ‘nobody can compel me to be happy in his own way’ and observed that paternalism is “the greatest despotism imaginable.”2

The Ebb and Flow of Negative and Positive Liberty

As Berlin showed, negative and positive liberty are not merely two distinct kinds of liberty; they can be seen as rival, incompatible interpretations of a single political ideal.  The more society embraces of one, the less it has of the other and vice versa.  To a large extent, negative and positive liberties are mutually exclusive to one another.

Ideally, society looks to strike the right balance between negative and positive liberty.  A critical mass of individual liberty must remain free from societal control and failure to do so equates to despotism.  Individuals strive to maximize freedom, yet most realize one must surrender some liberty to society to save the rest.  But if too much liberty is surrendered, we reach a point where there is nothing remaining to preserve.

The ideal society will look to maximize the amount of negative liberty and apply only the minimum amount of positive liberty to address the most pressing issues or emergencies.  That was the foundational premise of the United States.  Our Constitution was designed to permanently safeguard individual rights via negative liberty principles from the changing whims of the majority or the inevitable temptations of those in government.

Wars and revolutions are fought to establish and preserve negative liberty.  The human condition yearns for independence.  Yet people tend to let their guards down and can become complacent during good times, providing windows of opportunity for the entrenched bureaucracy and ambitious politicians to commandeer positive liberty theory to increase control over the citizenry.

Negative and positive liberty wage a battle of balance over time, particularly in chaotic democracies and other popular forms of government.  A negative liberty-laden society is created through political/societal disruption.  Followed by a slow yet steady evolution to more state control under cover of positive liberty theory.  To the point where authoritarianism reaches critical mass. And then the cycle repeats itself with a new disruption in response to an unbearable environment for the individual.

Positive liberty doctrine has been utilized through the years by dictators, socialists, and communists to justify coercion of the individual and suppression of society.  The pitch was tempting, particularly during trying times: ‘The government, leader, or state is here to help you become a better you:  there are things beyond your control that hold you back and government will fix that. Give up your negative liberty and everything will work out to your liking.’

Over the past century, Germany and Spain (fascism) along with Russia and China (communism) jumped headfirst into embracing positive liberty and the shunning of negative liberty.  The results have been, and continue to be, devastating to individual rights, minorities, and quality of life.

The United States, which valued negative liberty and the rights of individuals to act on their own accord, served as the shining light inspiration and primary bulwark against Hitler’s Germany, the Soviet Union, and now communist China. Yet ironically, while America was leading the way, it was also slowly and incrementally slipping toward accepting positive liberty policies and diminishing negative liberty.

The slipping toward positive liberty thinking and away from negative liberty values began with Woodrow Wilson and his trust of the professional bureaucrat to know what is best for Americans.  Further sliding ensued with FDR’s New Deal and LBJ’s Great Society.  President Obama’s eight years took things even further down the scale to where government pervaded all aspects of society and economy.

Each government failure to address a targeted societal ill justified more government.  State failure bred clamoring for more positive liberty via even bigger government.  Meritocracy of the individual was supplanted by mediocrity of the collective.

In 2022 it feels as if the Left has achieved a high-water mark in American exposure to positive liberty tactics.  Individual rights and freedoms are at 200+ year lows.

Three Current Symptoms of the Left’s Application of Positive Liberty

Americans today experience a host of symptoms that betray the prevalence of the Left, big government, and the hollow promises of positive liberty.  Three particularly troubling ones stand out.

Government negates individual achievement at every stage of the educational journey, from preschool through university.  Entrance proficiency exams to determine admission into magnet preschools are scrapped for lotteries.  Homework and grades are dropped in high schools in exchange for the camouflage of sky-high matriculation and graduation rates.  SAT scores are no longer accepted or considered for college admissions. GPA inflation rages at universities while class rankings are no longer tabulated.  The ivory towers went from marketplaces of ideas and nurturers of free thought to the minarets of the intolerant religion of the Left.

The government and the Left tell us such educational approaches are fairer to all and erase institutional systemic biases that hold back individuals from their potential.  Yet the result is the cheating of individual achievement, meritocracy, and standards.  Every student is brought down to the same substandard experience and outcome.  Ultimately, society’s capacity is diminished when it can no longer effectively educate its incoming workforce.

Second, government used the false promise of knowing what course was best to keep the individual healthy and society safe from the Covid pandemic to justify the imposition of drastic policies that severely reduced individual rights and the free economy.

The past three years of big government’s management of pandemic via coercion has led to economy-wide shutdowns, skyrocketing inflation, supply chain asphyxiation, record national debt, stunted educational development of kids, and reduced wellness of wide demographics.  The individual lost nearly complete control of what they did each day, week, month, and year; from their economic livelihood to their freedom of movement to what goes into their bodies.

The return received in exchange for this surrendering of free will has been grossly disappointing:  over 800,000 American Covid deaths and climbing, endless reactionary flip-flopping on policies, and the clear sense that government leaders are not following science to protect citizens but instead are imposing political science to control citizens.  Pandemic has provided an epic opportunity for the Left to institute positive liberty policy across every facet of American life.  And the Left did not hesitate to do so.

Third, positive liberty doctrine has been applied lavishly to justify the gamut of climate change policies.

Climate change ideology is the ideal long-term opportunity for the Left to permanently impose positive liberty doctrine across society and to squelch individual/negative liberty.  That’s because energy is used by everyone and impacts everything; control energy and you control the individual, the economy, and society.  Just listen to the common rhetorical climate musings from the Left and their implied messages:

The evil genius of the Left is evident with climate change zealotry: convincing a large portion of the population that what atmospheric trace concentrations of carbon dioxide will do in fifty years warrants an immediate surrendering of negative liberty and individual rights.

If you like being in control of your own destiny, if you own a business, if you want a promising future for your kids, if you believe in science and reason, and if you love your country, then heed Berlin’s teachings on the endearing promise of negative liberty and the false hope of positive liberty.  Steadfastly protect the former and be on constant guard against those promoting the latter.  More than you think may be riding on your willingness to do so.

1. Isaiah Berlin, Two Concepts of Liberty, An Inaugural Lecture Delivered Before the University of Oxford on 31 October 1958.