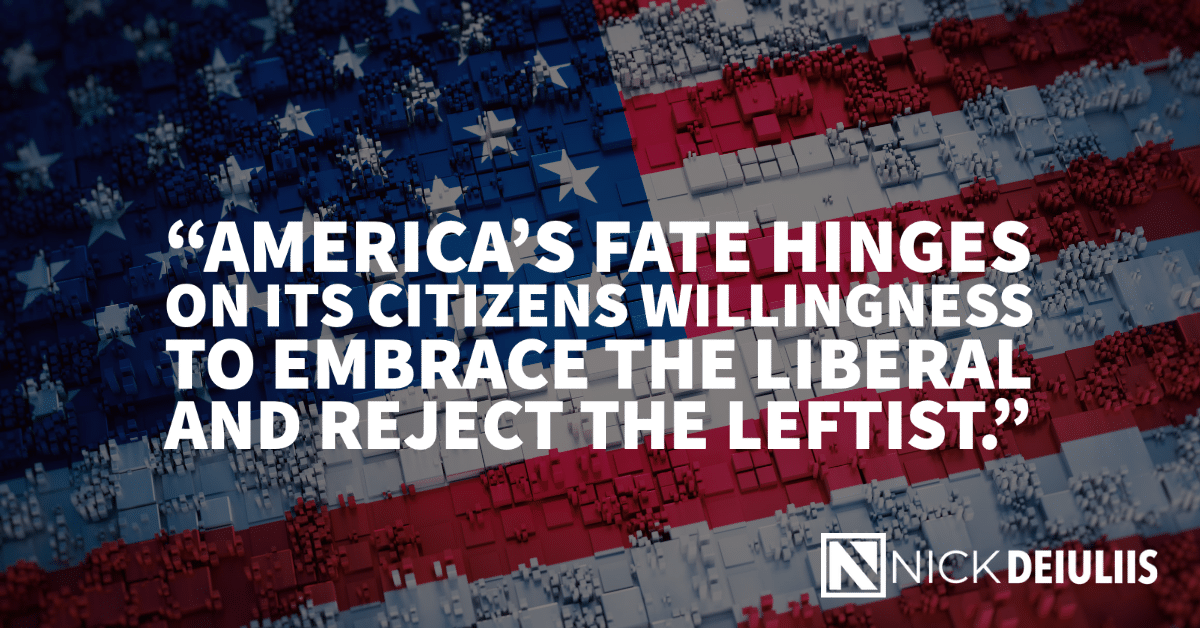 A very bad habit has developed across society the past few years: lumping together two things that are quite different. In fact, so different that further reflection reveals these two things are nearly opposites. Yet people far and wide keep interchanging them as if they are the same.

The problem relates to confusing a liberal with a leftist. They are most definitely not synonymous. Our nation needs more of the former and to recognize the sinister danger growing with the latter. So, consider this Civics 101 crib sheet to allow you to better spot each, and subsequently embrace the liberal and reject the leftist.

A liberal is a champion and defender of individual rights. Perhaps the best illustration is how a liberal will staunchly defend the right to free speech and freedom of expression. A true liberal values the Bill of Rights as much as the Constitution, for they recognize without the protection of individual rights, other protections for the citizenry found in the Constitution will not matter much.

A leftist views individual rights as a threat to be suppressed to benefit the collective. That’s why leftists display an affinity to censor, shout down, and strangle dissenting opinions and conflicting views across the public square, academic quad, and media newsroom. All under the official banner of protecting the public from ‘hate speech’ and ‘misinformation’.

A legitimate liberal is a proponent of capitalism, recognizing value creation and personal achievement benefit the individual as well as the market economy. Yes, many liberals favor more government regulation of economic activity than a conservative or libertarian. Nevertheless, the virtues of a free-market economy are obvious to the liberal.

A leftist abhors capitalism and instead insists on a command economy, where the state dictates capital allocation, industry winners, and industry losers. Leftists adhere to either socialism or communism, depending on the facts and circumstances of the situation.

A liberal supports the concept of the nation-state, recognizing citizens are members of distinct nations with unique cultures and attributes. Formal borders and national sovereignty are respected.

A leftist is anti-nationalist. People are not citizens of a nation, but instead are members of the global community. Borders don’t matter and, in fact, should be disregarded. Leftists don’t differentiate by national identity and instead differentiate by class.

If you have been mistakenly mixing and matching your liberals and leftists, don’t be too hard on yourself because you are not alone. Media talking heads, political pundits, and self-proclaimed ‘reliable sources’ do the same.

Consider inherently biased Wikipedia. Look up ‘list of American liberals’ and peruse the politicians named as liberals. You will find Bernie Sanders (along with Kamala Harris, Elizabeth Warren, and Pete Buttigieg). The Bern is a died in the wool leftist, so much so the cranky one spent his honeymoon in the USSR. Labeling Bernie Sanders as a liberal is an insult to liberals and gives more credit to Sanders than he deserves—serving as yet another illustrative warning to those who assume if one reads it on Wikipedia, it must be accurate and balanced.

Confusion with discerning liberals from leftists is wreaking havoc with the workings of the Democratic Party, creating party-wide dysfunction. What is in fact an internal party civil war between the liberal core and the leftist extreme wing has been inappropriately mislabeled, by negligence or intention, as a battle between ‘moderates’ and liberals.

A moderate is someone falling between classic conservative and liberal philosophies, not someone sitting on an imaginary spectrum between a liberal and a leftist. Senator Manchin and President Clinton are liberals, and certainly not leftists. Where they sit on the moderate-liberal spectrum is an interesting question subject to endless debate, but a different matter. Congresswoman Ocasio-Cortez is a leftist and certainly not a liberal. Yet all one hears is how Manchin is the moderate emblem of the Democratic Party and Ocasio-Cortez is its liberal emblem. That’s an apples-and-oranges mixing of terms that muddles.

Comparing and contrasting the liberal to the leftist is a worthwhile exercise. Americans need to be able to astutely differentiate the two now more than ever. That’s because liberals played a crucial role in creating our republic and are a prerequisite to a bright future. Conversely, leftists look to deconstruct America and ruin its prospects. America’s fate hinges on its citizens willingness to embrace the liberal and reject the leftist.

Nick Deiuliis is the author of Precipice: The Left’s Campaign to Destroy America. For daily insights and commentary from Nick follow him on Twitter at @NickDeiuliis.