I recently visited one of America’s iconic cities and one of my personal favorites: Los Angeles. Modern day LA simultaneously exemplifies the exciting and the troubling of the nation’s urban areas. Potential remains exponential while risks and problems accumulate. 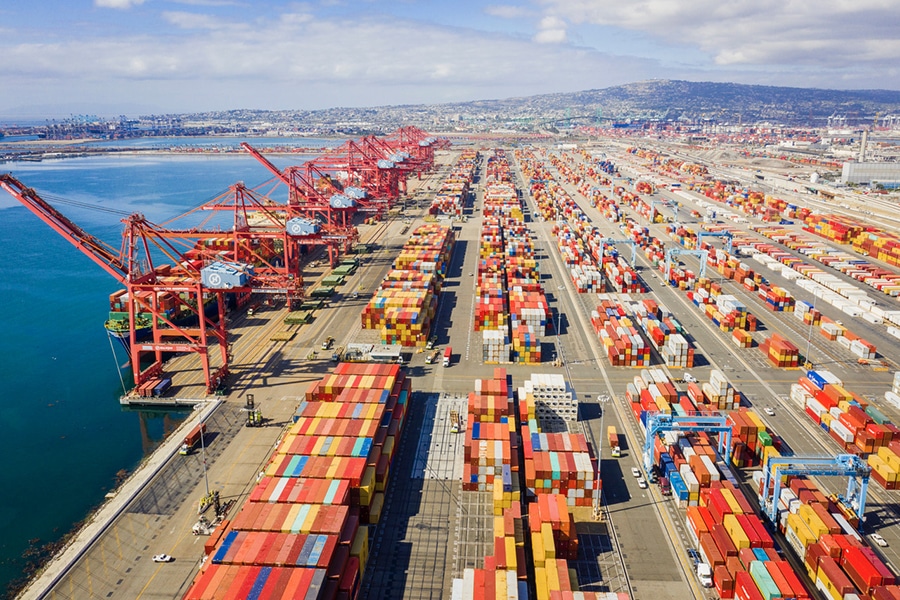 Flying into LA from the east, the transition from barren desert (excluding the oasis of Palm Springs) to the fertile urban sprawl is sharp, with the San Jacinto Mountains acting as an impressive physical wedge between two binary worlds. In daytime, flyers’ views transition from brown nothingness to megacity sprawl. At night the black void suddenly switches to a sea of light. The Los Angeles basin makes its impression on visitors from the air before they step on terra firma.

Looking out the plane window on the approach to LAX during this visit, my attention was immediately drawn to the port of Long Beach. Those familiar, massive ship unloading cranes were lined in neat rows, starting the nation’s physical infrastructure chain from the Pacific’s edge moving inland: interstate, power transmission lines, rail, and truck intermodal container flow. Long Beach from above is an impressive exemplar of crucial supply chain links.

But this time there was something noticeably different with the port view: large clusters of container ships huddled at the port mouth and long lines of ships stringing out to sea from the clusters. The image reaffirmed the obvious: quality of life hinges on a supply chain that is subject to risk. You can tout the best of physical infrastructure, but to properly function one also needs focused execution operating under sound policies. The logjammed fleet at the port mouth proved misguided government policies adversely affect execution, which damages the nation’s supply chain, which hurts quality of life from sea to shining sea.

Los Angelinos recently learned how one supply chain bottleneck can damage other links of the supply chain. Huntington Beach and Newport Beach south of LA recently dealt with an oil spill from an undersea pipeline. Environmentalists, media, and leftist politicians were quick to assign blame to the negligence of the oil industry, pointing to the spill as yet another example of how profit and carbon are ruining the planet. But before you could say ‘climate change’, it turns out that the rupture of the pipeline is now suspected to have been caused by one of those waiting cargo ships that dropped anchor and then drug it across the sea floor, catching and then pulling apart the pipeline. The Orange County shoreline became another casualty of a broken supply chain triggered by inept policy.

Obvious fixes won’t come easy. California’s political leaders and regulators will not provide a smooth path to increase truck traffic flow out the port of Long Beach. California already limits the supply of able trucks by its Truck Ban regulation, which bars permits for large trucks that predate the 2011 model year. Politicians’ sound bites on local radio and quotes in local papers were citing the need to immediately increase regulation of traffic flow into and out of the port and surrounding communities. That’s code for more bureaucracy, cost, and inefficiency. All of it spelling trouble for the broader economy.

I used a driving service this trip to get to and from meetings and locations. Now I must confess, one of the biggest enjoyments I get from business travel is spending the better part of a day talking to the driver going from meeting to meeting. Sometimes the driver prefers quiet, but most are happy to be sociable and share thoughts and insights of a true local. No matter where the city, you will learn a lot about its people and culture by simply listening to the driver.

On this trip, I was lucky to have the latter with the driver for the day; let’s call him Sam. Sitting in the morning rush around the upscale Beverly Center, we engaged in a conversation about what Los Angelinos refer to as the ‘crisis.’ No, it’s not climate change. Instead, it’s the homeless epidemic. And it is getting worse.

On the sidewalk alongside the Beverly Center was a homeless structure, somewhere between a tent and a house. The rectangular structure ran about 30 feet in length and nearly the entire width of the sidewalk, leaving about two feet for pedestrians to pass through. The corners and middle of each side were anchored to lumber studs, with the height around six feet. The occupant installed rectangular windows along the side walls and covered them with clear plastic. A small grill and lawn chair sat alongside the structure in a makeshift patio area.

It was a strange combination of feelings: being impressed by the builder’s ingenuity and being depressed by the obvious human plight of living on the street. As Sam and I were admiring the workmanship while sitting in the traffic, a police vehicle drove by. I asked if police enforce vagrancy laws with homeless. Sam laughed and replied they did not. Half a block up the street, the police vehicle sounded its siren and pulled up behind two late model foreign cars with hazard flashers on parked in the right lane in front of a Starbucks. The cop issued tickets to the vehicle drivers who left the cars parked in busy traffic lanes during the rush hour.

So much in those thirty seconds reflects the reality of LA: extreme poverty rubbing up against extreme wealth, police enforcing some laws and ignoring others, everyone going about their daily routine impervious to it all. Most depressing of all: a growing acceptance by all, from the homeless to the wealthy, that homelessness is unsolvable and here to stay.

Like magic, five minutes later while still waiting to get through the same jammed intersection, the radio newscaster informs us that LA City Council, that body of epic ineptitude, voted to ban homeless encampments across three city districts and within 500 feet of schools and libraries. Just over fifty sites will be affected, with the newscaster telling us it reflected less than half of the locations that were under original ‘consideration’ for the homeless ban this summer. The rule will be enforced two weeks after signs are posted in the areas. The estimated cost of the signs is close to $2 million. Sam the driver is highly confident the move will not improve the homeless situation, would not be surprised if it makes the situation worse, and is certain the $2 million could be put to much better use than signage. I agreed but told him to think of the windfall for the government bureaucracy: a whole new horizon of regulations, debate, and process to feed from without having to solve anything.

This mid-October during my visit, the Dodgers were chasing another World Series title and hosting the Atlanta Braves in the National League Championship Series. I’ve been a life-long Dodgers fan, with the Dodgers second in my heart only to my hometown Pirates. Those 70s and 80s teams managed by Alston and Lasorda were awesome and the setting of a game at Chavez Ravine on TV provided one of my first impressions of southern California. Dodger Stadium was packed, as expected, although Dodgers fans were true to form by arriving fashionably late and taking three innings to fill the stadium.

But even spectator sports don’t escape the grasp of the administrative state these days, especially in the elite bureaucratic haven that is California. Medical ‘experts’ were on the airwaves over the week cautioning how cheering and chanting at sports venues can increase the risk of spreading or being infected with Covid. From what I could tell, no one was listening to these ‘experts’ at the games.

Perhaps the biggest surprise during the trip was the how empty restaurants were.

Many restaurants have shuttered or scaled back days and hours of operation, due to a combination of lack of customers and a shortage of workers. Despite the reduced capacity of the dining sector, there were lots of empty tables during lunch and dinner hours. An owner of a popular Hollywood restaurant summed it up: “It’s always been excruciatingly expensive to run a business here, but you could shoulder it if you offered top product. Now though, we are told to shut down and then when we reopen the government makes it even more expensive to get people to come work and makes it more painful for customers to eat out. It’s been a death knell for lots of great establishments.”

As businesses and the private sector get crushed in California from excessive and heavy-handed government bureaucracy, government itself is doing quite well.

The week I was in town Governor Newsom was bragging that the state will have another “historic budget surplus” next year, following a massive surplus this year. The reasons for the twin surpluses? Massive subsidy from the federal government to California under banner of Covid relief (translation: wealth redistribution from fly-over country to coastal elites), government dropping services and expenditures during its own mandated shutdowns (translation: government stops doing its job to save money), and taxes filling the state coffers (translation: value creators in the free market get no Covid relief and must continue to pay up to support bureaucrats). The pandemic has been very, very good to California government.

On energy matters, it is crystal clear that greater Los Angeles will not be anything close to carbon neutral in our lifetimes.

Heavy vehicle traffic is everywhere (still predominantly combustion engine vehicles on the 405 Freeway), the metropolis is a sea of lights at night, climate (indoor) is controlled, everyone is staring at charged phones, and the consumption of carbon-based products abounds. The power grid demand is growing and things like wind and solar can’t come close to filling it reliably.
But state and federal government keep doing all they can to make carbon prohibitively expensive for the middle class and working poor that rely on it to earn.

Gasoline prices were averaging more than $4.50 per gallon in state during my visit. The wealthy elite driving subsidized electric vehicles or expensive late model foreign vehicles could not care less about the price of something as incidental to them as gasoline. But the army of service providers and small business owners scrapping every day to eke out an income underneath a mountain of regulation, taxes, and bureaucracy are facing a fuel cost straw that will break the doers’ backs.

Crime, both property and violent, is a problem in LA like most large American cities. The morning of departure brought news of an overnight shooting claiming multiple victims. Homicides in LA spiked in 2020, totaling nearly 350, and are on pace in 2021 to surpass last year’s number. Security cameras cover every imaginable angle of home exteriors across every neighborhood; yet one wonders if all the surveillance video feeds and security signs in yards deter any property crime in the end.

Marijuana is not just legal in California, it is everywhere. You don’t see it, but you certainly smell it: walking outside on a neighborhood street, driving in traffic, or strolling around a shopping area. And the odor is present morning, noon, and night. I read the studies that show moderate marijuana consumption is less damaging to health than tobacco or heavy alcohol consumption, and I tend to agree. But one wonders what the cumulative effect is on society when many of us are continually numbed and drained from regular marijuana use. I fear the answer may be more couch slouching and less achievement. That’s not the American way.

Flying home on a carbon-fueled plane, I had time to reminisce about my couple of days in LA. Southern California reflects the dichotomy of modern-day America: a proud legacy and an embarrassment of riches colliding with a cresting wave of problems that may deliver an unsustainable tomorrow. Although I continue to root for LA, the scoreboard is flashing trouble.

Ode to Los Angeles From a Wary Admirer