Government, elites, and the Left never let a good crisis go to waste. Often, they will inflate, manipulate, or manufacture crises to justify more power, with the price being paid by the middle class, taxpayers, and future generations. As the missions of government and affiliated institutions expand under the false flag of offering the cure to the convenient crisis, it is almost a certainty that the prescribed cures’ harms to the real economy grows with them.

Few entities epitomize this danger more than the Federal Reserve, with its motivated drive toward imposing ‘climate stress tests’ on banks. And few nominations to this burgeoning bureaucracy have ever highlighted the threat more deeply than that of the now-withdrawn nomination of Sarah Bloom Raskin. Ms. Raskin’s nomination put a spotlight on the Fed’s continued leftward drift, mission creep, and manipulation of the private capital markets. Although that nomination battle has concluded, the Fed’s campaign against domestic energy and the real economy is only beginning. 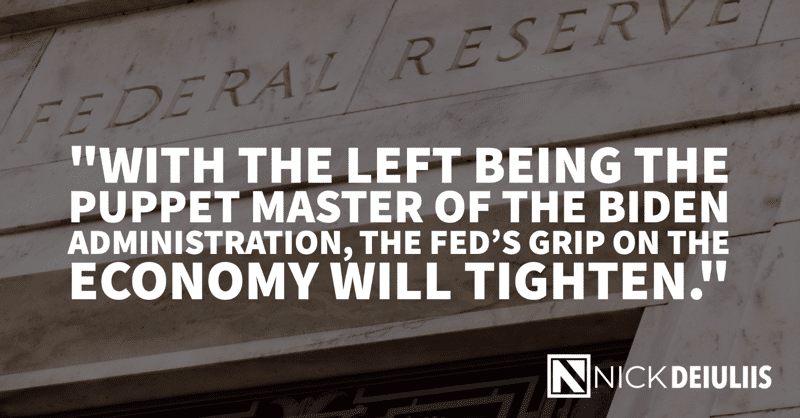 Staffed by thousands of PhD economists who spent careers in government and academia; led by governors and regional presidents who never had to make payroll in the real economy; and, answering to politicians who subscribe to leftist ideology, the Fed has become an Orwellian behemoth. It seeks growth in its powers for growth’s sake, and is more than willing to construct questionable premises while disposing of troubling facts down memory holes.

The power grab of the Fed has reached critical mass.

Our central bank not only moves the market, it is the market.  That is, until the Fed loses credibility, in which case the Fed ends up chasing the market.  We may be in the midst of such a reversal, now that the Fed has clearly misread inflation and continues to move at glacial speed to begin quantitative tightening and raising interest rates.

The Fed’s objectives not long ago were simple and direct: to set monetary policy to promote maximum employment, ensure stable prices, and set moderate long-term interest rates. What happened since the financial crisis is stunning, even in the current era of big government.

The Fed’s balance sheet has exploded from under $1 trillion of assets in 2006 to nearly $9 trillion today.  The Fed now talks about beginning quantitative tightening to reduce the balance sheet toward normal levels, but the talk is already long in the tooth.

Meanwhile, real interest rates have been purposely dialed to negative for years, pummeling savers and retirees and instigating market speculation, asset bubbles, and inflation.  Even if one believes the current consensus that the Fed will raise rates by 0.25% increments nearly a dozen times over the next two years, real interest rates would still be negative if inflation does not decline significantly in the interim.

The Fed’s scoreboard of late is blinking red, and everyone senses it is going to get worse, much worse, before better.  Adding to the wall of worry for Fed watchers is the extensive track record of our central bank’s failures that spans its history going back to its creation in 1913.

Yet elites operating in a cocoon insulated from accountability constantly look for the next excuse to grow the Fed’s dominion over the economy by controlling capital flows.

That’s why recently the Fed has commandeered issues ranging from social justice to climate change as useful instruments to retain and grow power.  The Fed believes it does such a good job on monetary policy and inflation, that it now can solve the vexing problems of racial inequality and lack of economic inclusion, while also controlling future weather and investment decision making.

With the Left being the puppet master of the Biden administration, the Fed’s grip on the economy will tighten.  And it will need leadership within its burgeoning bureaucracy that adheres to the proper ideology:  one that believes institutions like the Fed should be utilized to grossly distort the free market, creating winners and losers, both intended and unintended.

And for Ms. Raskin and like-minded future nominees, they look to push the Fed’s path of value destruction deeper and further than ever.

For example, Ms. Raskin advocated for penalizing or precluding banks’ lending to domestic energy companies, whether they be in natural gas, oil, pipelines, or refining.  All in the name of saving the planet.  She stated, “There is no indication that the value of fossil fuel assets is ever going to return,” and wrote how fossil fuels are a “terrible investment.”  How inept that expert prediction now looks in 2022, proving once again how out of touch the expert class is when it comes to the real world.  Should she had been confirmed, she likely would have pushed to have the Fed restrict capital flows into the never-more-vital domestic energy industry.

The danger has not passed.  Unfortunately, there is a long line of potential nominees that Congress will surely soon consider who share similar, or perhaps more extreme, views to Ms. Raskin.  We need nominees willing to scale back the mission creep of the Fed, not those blindly advancing it beyond its circle of competency.

Not only is controlling future weather not in the Fed’s power alley, many worry that reining in self-inflicted inflation may not be a core competency either.  The more the Fed’s mission veers from its shaky circle of competence, its performance will worsen and its politics will dominate. That’s bad for taxpayers, the middle class, business owners, individual rights, and wide swaths of this great nation including my home of western Pennsylvania.

This is not a typical Democrat-Republican issue.  Instead, this is a government-citizen issue and affirming who answers to who.  Congress needs to pass this civics test when it comes to holding the Fed to a reasonable mission and when assessing future Fed nominees.

Nick Deiuliis is the author of Precipice: The Left’s Campaign to Destroy America. For daily insights and commentary from Nick follow him on Twitter at @NickDeiuliis.