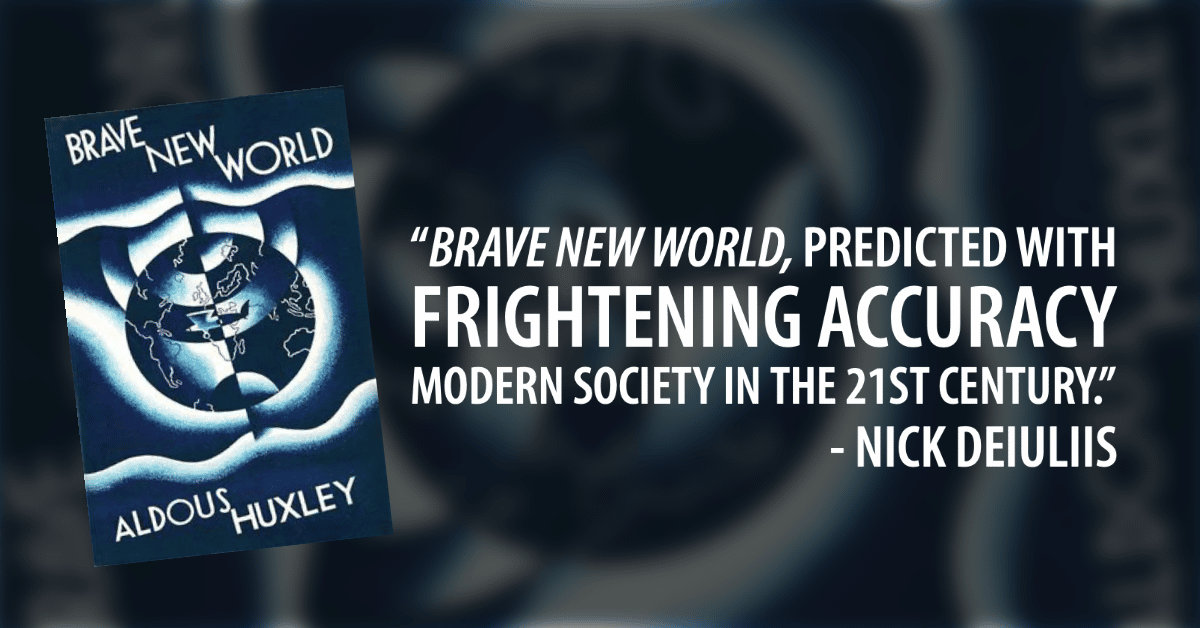 Aldous Huxley, the English author, was blinded for nearly two years by infection when he was a teenager. Despite his ailment and lingering poor eyesight, Huxley managed to produce a dystopian classic with a precise vision that gazed ninety years into the future. His masterpiece, Brave New World, predicted with frightening accuracy modern society in the 21st century. 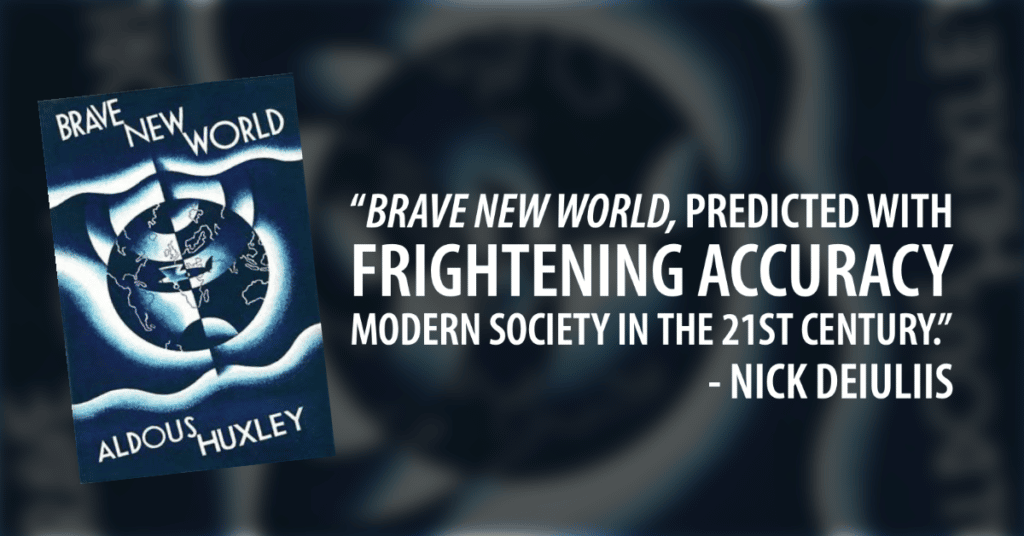 Huxley penned Brave New World in 1931 and published it in 1932, years before Orwell’s 1984. The dystopian worlds offered by each classic share similarities but also present sharp contrasts. Despite 1984’s rightful acclaim, one might argue Brave New World scores more direct hits when it comes to comparing its society to that of modern-day America.

Brave New World envisions a society run by a global bureaucracy that practices a kinder, gentler totalitarianism. There is a strict caste system of elite alphas at the top down through lowly epsilons at the bottom.  Humans are no longer born, but instead are manufactured, in labs with predetermined outcomes and castes.  Complex yet aimless entertainment and the drug soma are applied as tools to numb and train those in society to be passive and submissive.  God no longer exists, and everyone worships Henry Ford and makes the sign of the T.  Monogamy has been replaced with promiscuity.

A World of Parallels to Today 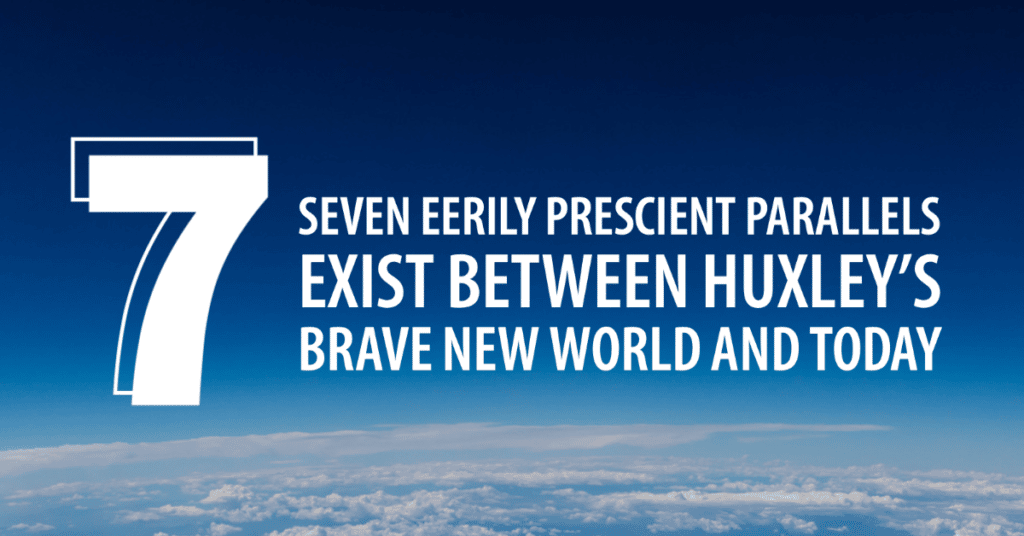 First, Huxley brilliantly illustrated how constant but hollow leisure in society does not lead to increased culture.  A popular saying in Brave New World is “never put off till tomorrow the fun you can have today.”  Games like obstacle golf are encouraged to the point of participation being a civic duty, and the games are designed to be complicated and constantly updated.   The complexity helps promote continuous and hollow consumption, so that people are kept busy by both playing the games and making the equipment to play the games with.  Self-cheating is encouraged.

The connections to today are striking.  Instant gratification prevails over long-term achievement.  Americans now have an obsession on consumerism with the constant acquiring of more stuff.  Consider the exponential growth in mindless entertainment such as VR and gaming.   And our everybody-gets-a-trophy/don’t-keep-score/cheat-until-caught culture.

Second, Brave New World informs us as to how science is the enemy of the totalitarian state when left unhindered and must be tightly controlled and distorted by the state so that it can become a useful instrument.

Science is a crucial piece of the strategy in keeping society in line, but scientific progress was purposely frozen with the advent of the world state.  Science and the muzzling control of it are the prices of stability.  Science propaganda is practiced at colleges, and one believes things because they were conditioned to believe them.  The culmination is science becomes a cook-book orthodoxy that is never challenged. The effort is managed by the state in a 60-story building that houses the Bureau of Propaganda and the College of Emotional Engineering.

The mirroring to today’s world is obvious.

Science has morphed into political science.  The scientific method has been replaced by scientific consensus.  We are told when the science is settled and are instructed to obey.  Questioners and dissenters of popular views or of accepted science in the university culture get labeled as heretics and deniers.  Although most literary critics interpret Brave New World to warn of the danger of science, I interpret something subtly but crucially different:  the danger of the state suppressing and commandeering science.

Third, Brave New World exposes the dangers of how the system can institutionalize class and solidify socio-economic barriers.   Mothers no longer give birth.  Instead, embryos are constructed in the lab and customized through chemistry to manufacture people at the desired caste level.  Effectively, children are decanted, from the privileged alphas down to the low-ranking epsilons.  Each person is molded by the hereditary and by the environment of the state-chosen caste.  Babies are not raised by parents but by State Conditioning Centers and are trained by crude Pavlovian methods to hate flowers and books.  The ideal society is described as having the proportion of an iceberg, where 1/9th sits at the top as elite alphas and the remaining 8/9ths are toiling below the water line.

Think about how much of this is present today.

Our public education system in major cities virtually guarantees students never realize their full potential.  Self-determination as to what one does in life is becoming an increasing rarity because of socio-economic obstacles. Science, math, and reading competency are not the focus of education these days. Instead, the exclusive focus is to deaden the minds of students and create a subservient collective that thinks what it is told to think and believes what it is told to believe.  The 1/9th of elites are the alphas above the water line, while the rest of society is kept struggling below the water line.

Fourth, Brave New World reminds us of the perils of loveless sex and promiscuity.  In Huxley’s society, “everyone belongs to everyone else.”  Sex is pursued exclusively for physical pleasure and the idea of a dedicated and committed relationship is viewed as savage.  The character Lenina (Huxley assigned character names in Brave New World to be plays on despots, scientists, politicians, and business leaders) gets lectured by her friend for not being promiscuous enough.  Children are taught “erotic play.”  Family, love, and monogamy are pornographic.  The word “mother” has become a crude obscenity, so profane that to speak it sparks revulsion.

Fifth, in Brave New World we see what awaits society in a drug culture. The miracle opiate is soma, and it is administered from cradle to grave, with euthanized death set by the state promptly at age 60.  Workers are paid in soma to feed their addiction.  Soma giveth by arresting the aging process, providing an emotional high, and softening depression during tough times or from harsh realities. But soma also taketh by acting as a poison that kills the person over years of use and eradicating individual thought and free will.

Huxley would be shocked at how the various modern versions of soma afflict Europe and America today.  Social media brings mass emotional addiction to children and adults.  Fentanyl, heroin, crack, alcohol, and marijuana are consumed legally and illegally to create physical additions that cross all socio-economic levels, as people seek escape from whatever haunts them.  Imagery of the physical ideal sets expectations at a young age, leading to more and more medical procedures and treatments to halt the natural aging process.

Sixth, Brave New World paints a society where the individual is erased into the collective and where free will and independent thought are vanquished by totalitarian domination.  Imagination and sense of self are dangers. Individual free thinkers who read the banned great works, from the Bible to Shakespeare, are savages of old civilization and are exiled to the wilds.  A popular slogan is “when the individual feels, the community reels.” Another one is “everyone works for everyone else.”  War is waged against the past, when individual rights were supreme.  To be happy, you don’t pick your path; instead you learn to enjoy the path that has been selected for you.

What an accurate portrayal Huxley foresaw of today’s political correctness.

Views of the state are constantly streamed to kids from all directions and across all mediums so that it conforms their minds.  There are parallels to today’s cancel culture, where you must tear down anything traditional that would make one think and challenge.  College syllabuses delete classic works and public square statues of prominent leaders are removed.  Dissenters are not simply ostracized but attacked by the Twitter mob.  And meritocracy, attacked as unfair, is replaced with the unethical injustice of equal outcomes.

Seventh and last, Brave New World demonstrates how such a dystopian society is a result of omnipotent and global totalitarian government.  The World State motto is “Community, Identity, Stability.”  A World Controller determines what information is allowed for public access and consumption, what science is acceptable, and what works are to be locked up and forbidden.  The state figured out that social conditioning was much more effective and lasting than brute force when looking to control a population.

These days, global organizations and accords make one wonder if we still live in a republican democracy.   The United Nations, World Health Organization, World Bank, and G-20 hold more sway over Americans’ pocketbooks, quality of life, freedoms, and decision-making than the U.S. Congress.  The faceless unelected bureaucrat buried within the administrative state holds more power than our elected president.  Domestic regulations and international accords take away more of our liberty in 2022 than any legislation or statute.

The Brave New World Outside Our Doors

In conclusion, Huxley provided a valuable service to the human condition.  He presented in stark contrast two very different views for the individual and society.  Consider two passages from Brave New World as illustrative of the contrast.

First, from the Director, who as representative of the state betrays a hatred for the individual: “The greater a man’s talents, the greater his power to lead astray.  Better for one to suffer than many be corrupted. Murder kills only the individual and what is the individual?  We can make more of them.  Unorthodoxy threatens more than the life of the individual, it strikes at society itself.”

Second, from John the outcast, who didn’t want comfort if it prohibited truth: “I don’t want comfort.  I want God, I want poetry, I want real danger, I want freedom, I want goodness. I want sin.”

Huxley, who passed away on the same day JFK was assassinated, warned us that before we start pining for such a brave new world, we should wait till we see it first.  My fear is the wait is over and it now sits outside our doors.