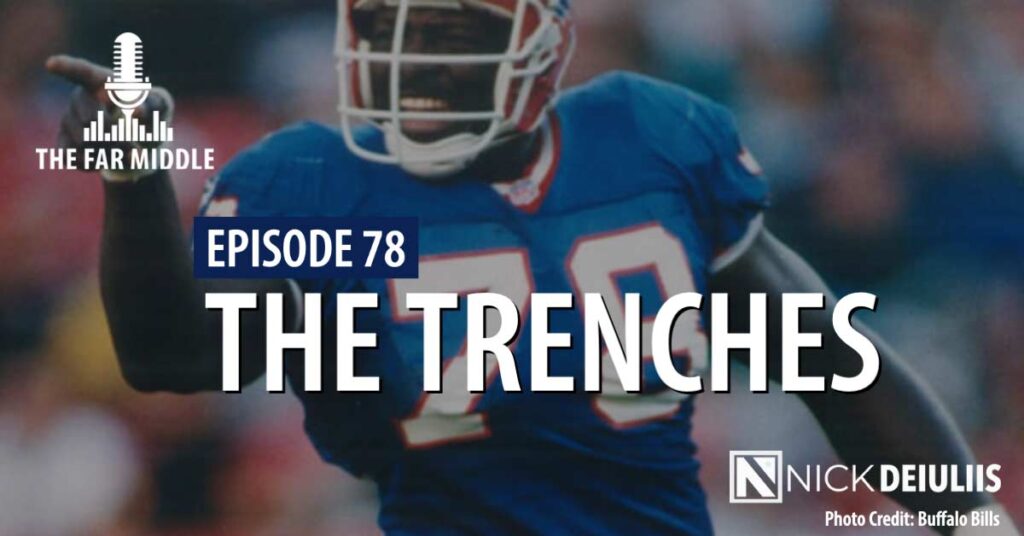 The Far Middle episode 78 is dedicated to the NFL’s unsung heroes of the trenches; including many legendary linemen who wore number 78, spanning Bobby Bell, Bruce Smith on defense, and Jackie Slater, Anthony Muñoz on offense, and many more.

Trenches, while not the most hygienic, have served as the method of choice for sewer systems across civilizations, and the modern toilet isn’t to be taken for granted. The discussion turns to San Francisco where the city recently announced one public toilet is going to cost $1.7 million with an estimated completion in 2025. Nick outlines the root causes why one public toilet costs seven figures and years to complete—causes that tie into many of the topics explored in Precipice.

From big city public toilet bungling, Nick next tackles big city public transportation messes, specifically the New York City Subway’s increasing crime and decreasing ridership. On crime and public safety, Nick addresses the overused soundbite of “be aware of your surroundings.” For individuals in bigger cities—if they truly are aware of their surroundings—then they likely realize it’s not safe to live there anymore, and it’s time to move, but that assumes the person has the job skillsets and finances to relocate. But what if they don’t have the means to move? “The poorest pay the steepest price when public institutions and public leaders don’t lead and they’re not accountable,” says Nick.

On government leadership and accountability, Nick asks if government isn’t focusing on the basics for taxpayers and citizens, then what is government obsessing about? The answer, negotiating away our national interests and leverage to further the favored ideology. A big example is what’s happening with climate change policy and related accords and regulations.

“Today, the highest levels of our governments are negotiating pacts with other nations that promise to benefit the climate in 50 years, but that clearly damage US interests today and that support our adversaries,” says Nick. He asks if such policies are doing the right thing, are a conflict of interest, a dereliction of duty or even treasonous? How many climate treaties, accords, regulations hurt America’s security, economy, and citizens, but at the same time benefit an adversary’s security, interests, and economy?

Staying on energy, Nick counters the president’s criticism of American energy companies being profitable, and their alleged refusal to increase oil and gas supply. Ironically, it’s been damaging government intervention pushing a “dog’s breakfast of a policy mess” that’s resulted in a constricted energy supply.