Readers of this title fall instantly into one of two categories: those who immediately know the subject matter or those completely clueless to it. That’s because the title borrows a line from one of the more famous songs in the subject’s song catalogue. The song is “The Lamb Lies Down on Broadway” and the subject is the rock group Genesis. 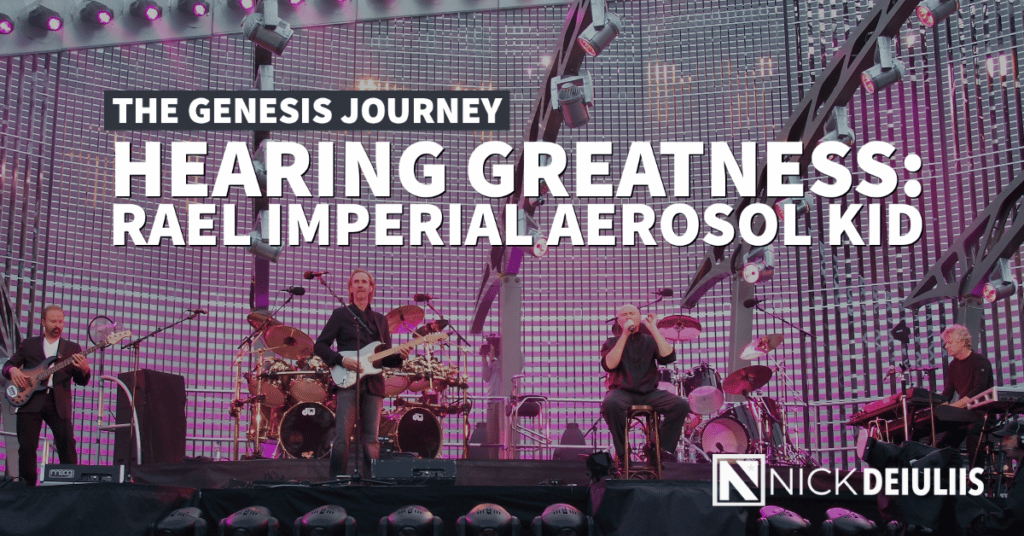 I’ve waded into exploring/revisiting the music of Genesis these past few months. Mostly exploring, as my past experience with Genesis was mostly limited to the latter part of the Phil Collins-as-lead-singer era, from the mid-1980s and beyond. I am grateful for this recent happenstance, yet fruitful, journey. For it has awakened in me the realization of the genius of Genesis, one spanning decades. Despite considering myself a rock aficionado, I had no clue of the impressive extent of this act’s body of work.

Genesis’s uniqueness is best understood through the lens of time relative to their contemporaries. There is the exclusive subset of rock acts that are truly great bands led by talented musicians. Then there is the even smaller category of great rock bands that climbed the mountain of success twice with two different lead singers: legendary acts like Van Halen (Roth then Hagar), AC/DC (Scott then Johnson), The Doobie Brothers (Johnston then McDonald), and Black Sabbath (Osborne then Dio). Finally, there are the rare great acts that successfully evolved from one genre to another (Prince and David Bowie are two that come to mind).

Yet there is only one rock band that was great, achieved epic success with two different lead singers, and impressively evolved genres from a progressive rock band into a straight-up rock band and then into a pop/top-40 band: Genesis. Let’s explore the three acts of the Genesis journey.

The genesis of Genesis starts in England during the late 1960s. The group during the earlier years was comprised of supremely talented musicians: Peter Gabriel on vocals, Steve Hackett on guitar, Tony Banks on keyboards, Mike Rutherford on bass/guitar, and an underrated Phil Collins on drums. Hardcore Genesis fans typically point to this era as the most impactful, often citing the albums Foxtrot, Selling England By the Pound, and The Lamb Lies Down on Broadway as three of the group’s best.

This early configuration of Genesis was all about prog rock. Poetic lyrics, expansive songs like “Supper’s Ready” (spanning twenty minutes), and extended song interludes where the members’ instrumental talents were indulged were hallmarks of Genesis during this era. Stage shows became elaborate productions with lasers, props, and slide shows. Peter Gabriel toward the end of his tenure with the band started to appear in concert in outrageous costumes and makeup, often drawing all attention to him and, in the eyes of some, detracting from the music and the rest of the band.

Worries about Gabriel stealing all the limelight were short-lived as the band had to deal with his sudden departure at the end of The Lamb Lies Down on Broadway tour in 1975. Gabriel’s surprising decision to leave (listen to his lyrics to his solo hit “Solsbury Hill” for a sense of how he came to the decision and the aftermath) may have been a bit of a relief to other members. But the timing was painful since the band was just starting to make it and was in financial debt despite methodically growing its following.

Personally, I like this era and its albums, with each one having a couple of classic numbers. There might not be a more beautiful song in rock than “Carpet Crawlers” from The Lamb Lies Down on Broadway (what a line: ‘you gotta get in to get out’). “I Know What I Like (In Your Wardrobe)” is great off Selling England By the Pound. And “Watcher of the Skies” is a great opener on Foxtrot. But for me, the best was yet to come for Genesis, with its next incarnation going on an epic creative run that no one saw coming.

With Peter Gabriel gone, the future of Genesis was far from certain. Phil Collins suggested going entirely instrumental, an idea that was thankfully shot down by the other members. Potential new lead singers were auditioned, with no success. Only when Collins laid down vocals for the classic song “Squonk” during the recording of A Trick of the Tail did Genesis realize its next singer was already in the band, sitting behind the drum kit (Collins does an amazing job with challenging vocals on “Squonk,” which his impressive considering it was the first song he tackled as frontman).

Turns out Phil Collins was quite the lead singer and songwriter, propelling Genesis on a dizzying arc of artistic achievement. The early Collins-led albums of A Trick of the Tail and Wind and Wuthering were impressive for preserving the group’s special prog rock flavor from the Gabriel era while injecting a newness. Fans accepted Collins from the get-go, wanting him to succeed as an old member of a favorite band in a new role.

When legendary guitarist Steve Hackett left the band after Wind and Wuthering, Genesis did not miss a proverbial beat. The next album, And Then There Were Three, offered up the band’s first hit single, “Follow You Follow Me.” Then came a trio of successive albums that defined Genesis in more ways than one: Duke, Abacab, and Genesis. These three albums delivered international success, made the individual members famous, and set a template for how to be a successful rock group.

Duke is my favorite Genesis album. “Behind the Lines” is an all-time great opening track and the next track “Dutchess” is awesome. “Misunderstanding” and “Turn It On Again” are a pair of songs that are about as Genesis as it gets. What I like most about Duke is the ease and positivity of the music; you can listen to the music and tell this album came together organically.

Although Duke is my favorite album, Abacab is not far behind. If you want a forgotten gem of a song, check out “Keep it Dark” off Abacab. And the album Genesis will always have a special place in my heart, as it was the first Genesis album I owned and one of the first records I bought as a kid.

At the end of 1983, Genesis was at the height of its powers and sat in the top echelon of rock acts. Give me these three albums on a deserted island (with a power source, of course) and I am happy for a long while.

But nothing lasts forever, and change is life’s only constant. Truisms for all of us, including Genesis, as they exited the second era and entered the next.

Turns out Phil Collins wasn’t just a solid drummer and great lead singer, but he was also a song-writing machine, churning out hit records in rapid succession. He was so prolific that he ran a hugely successful solo career in parallel with Genesis work, as if Genesis was not enough to contain his creative juices.

Amazingly, Collins was creating some of the most classic Genesis albums while he was simultaneously releasing hugely popular solo albums. The dates and lines blur in the early 1980s: the solo albums Face Value, Hello I Must Be Going, and the commercial monster No Jacket Required were being created and issued at the same time of the Genesis trilogy Duke, Abacab, and Genesis. Here’s an impressive bit of trivia: only three individuals in the history of rock succeeded in selling 100 million albums as a part of a group and another 100 million albums as a solo artist: Paul McCartney, Michael Jackson, and Phil Collins.

The combination of Collins’ creative genius coupled with his workaholic mindset were the catalysts to this third, and in my opinion, least inspiring era of Genesis: the pop, top-40 era. This last act of the group ended up mirroring what Phil Collins was creating with his solo work. Made for radio airplay and MTV, catchy, and popular selling singles packaged in albums that resembled little of the band’s epic legacy. If this was the era of Genesis where you were introduced to the band (which is partly the case for me), then you risked being not just underwhelmed, but oblivious to the greatness that was visible in the rearview mirror of the band’s recent past.

The albums from this era, mainly Invisible Touch and We Can’t Dance, were quite popular and did extremely well on the charts (both albums peaked in the top-five on Billboard in the US). And each carried mega-hits including the two title tracks, “Land of Confusion,” “In Too Deep,” and “Tonight, Tonight, Tonight.” But numbers aren’t everything when it comes to music, and the third act of Genesis just doesn’t do it for me.

My recent, deeper dive took me from liking Genesis to loving them. That transition was largely driven by a better appreciation of their music, particularly from the first two eras. But there are two other intangibles I admire about Genesis.

First, this is a band that stands entirely on its music. Outside of the period where Peter Gabriel went a little, shall we say, eccentric on stage, Genesis let the music do all the talking. Imagery is captured in the lyrics and rhythms, not in the glossy shellac of the album cover (although I really like some of those covers) or outfits and hair styles of the musicians (Phil Collins dresses like most of us at the office on a casual Friday).

But another intangible was coming to see the individual members of the group as gifted, intelligent, yet hugely unassuming people. You can’t get less ‘rock star’ in attitude than Phil Collins offstage. Scores of critics lambast Collins, but he succeeded in making Genesis accessible to the masses with the most understated of front men personas. Keyboard wizard Tony Banks strikes me as someone you’d talk investing or physics with, not party all night long with. And Mike Rutherford appears an everyday guy who you sense wrestles with the same life questions most of us do.

Genesis performs this coming week in the Steel City, and I will be there. Yes, it’s tough to see Phil Collins struggling physically, a reminder that life is short and health is precious. But watching normal people doing extraordinary things while remaining normal is special. I like the sound of that. But I like the sound of Genesis even better.