Nick Deiuliis is a life-long resident of Western Pennsylvania and the Pittsburgh area. He comes from a family of Italian immigrants with the men of his family working in the mines, mills, and railroads of the region.

Nick spent his childhood happily roaming the streets of Mount Washington and Oakland in the city of Pittsburgh, where his family lived. Nick, his brother, and cousins would tag along with his dad, uncles, and grandfather when they worked as ushers at Three Rivers Stadium to watch the Steelers and Pirates during their heyday in the late 70s and early 80s (although unfortunately most of that watching consisted of batting practice and pre-game warmups). He attended Saint Mary of the Mount grade school in Pittsburgh and was an altar boy. His first job was as a paper boy for the Pittsburgh Press, which served as a free education by allowing him to read the paper during a time when media was unbiased.

After moving, Nick attended Chartiers Valley High School in suburban Pittsburgh and was class valedictorian. Desiring to work in the steel or related manufacturing industry but facing no job prospects due to the economic devastation in the 1980s, he decided to attend Penn State University to pursue a degree in chemical engineering. 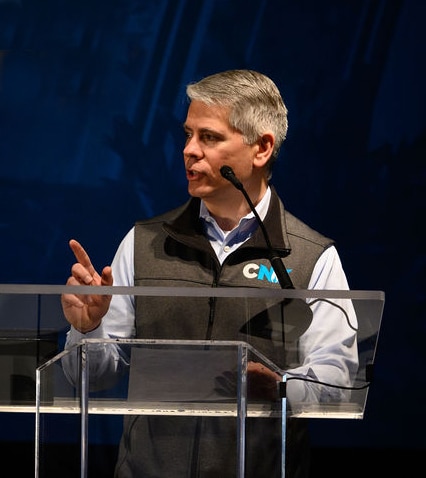 After college, Nick began his career with CONSOL Energy, where he worked as an engineer in the field of power plants and electricity generation. He subsequently attended Duquesne University to pursue an MBA and returned later to Duquesne for a JD Law degree.

Today, Nick is a chemical engineer, attorney, and businessman. During a career spanning 30 years, he served as the CEO or Chairman of the Board of five public energy companies. During that time, Nick has been on the front lines of the war being waged by elites against the working men and women of Appalachia, the “doers” of the American economy, and the free-thinking individual. Increasingly, he has resisted the rigid, anti-science, anti-progress, and anti-human ideology pushed by environmental organizations, elite academia, and entrenched bureaucrats. He views the leftist as the primary threat facing our nation and society.

Nick is a thought-provoking voice in the energy and manufacturing industries, advocating for technology, labor, environmental, and capital markets policy issues. He is a regular media contributor and speaks extensively on the virtues of the carbon economy, the nobility of the worker and middle class, and the vital importance of individual rights. Nick is a proud capitalist, free enterprise advocate, and staunch defender of keeping STEM fields independent of political correctness.

Nick plans to remain a lifelong Pittsburgher, where he resides with his wife and children. Major influences are his grandparents, Eddie Van Halen, Milton Friedman, Ayn Rand, Winston Churchill, George Orwell, and Alfred Hitchcock. His interests do not include golf, beachfront property, or expensive wine (although he does enjoy homemade wine). He is an average writer with something to say…

Without the ‘doers’ in society, quality of life instantly degrades. Our mission is to defend the ‘doers’ who create, enable, and serve free enterprise and to indict those who seek to appropriate the value of others via excessive regulation, academic dishonesty, subsidy seeking, or political machination.

America is designed to allow individuals, businesses, and industries to freely toil, achieve, compete, and grow. Government should be minimal and exists solely to serve the people. Reason and science must prevail over dogma and political science. The individual and her rights reign supreme over the collective and the common good. The American system of meritocracy creates, grows, and sustains the middle class.

Government should be minimal and exists solely to serve the people.

Today, an ecosystem of parasitic elites games the system and exists solely to appropriate and consume the fruits of the doers’ labor. Those falling within its sway include swaths of the government bureaucracy, academia, the media, and NGOs/foundations. Certain businesses and industries exist solely to play in a rigged system, draining value from the stream of commerce created by legitimate endeavors.

This threat looks to methodically suffocate the noble working man, the innovative entrepreneur, and the disruptive industry in a zero-sum game between value creation and value consumption. Left unchecked, culmination of this campaign results in the destruction of the middle class, decision-making control resting with the entrenched elite, and the rest of society becoming indentured have-nots perpetually dependent on an unsustainable system.

Silence results in the poor and the young paying the heaviest price. Laying low destroys progress and the future. Political quietism delivers devastation across America; from Appalachia and across the Rust Belt, and from the Mississippi Valley to the Great Plains. Elites label these places as ‘fly-over’ country. We call them home. Thus, to remain silent would be a failure of both ethical duty and moral responsibility.