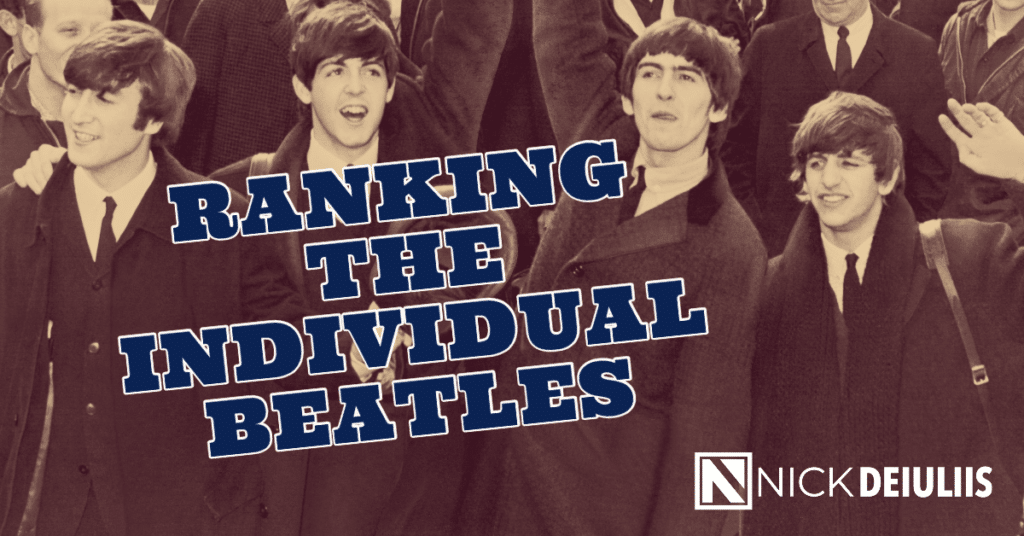 The musical consensus for years has been that the Beatles were the greatest act in the history of rock. The group’s prominence and fame eclipsed the music industry and permeate global pop culture to this day. The Beatles’ presence is so wide and deep that its four members are instantly recognizable by just their first names. Paul, John, George, and Ringo: mention those four in succession and everyone knows exactly who you are talking about.

I’ve always enjoyed and respected the Beatles’ music, although they are not my all-time favorite band. What I always loved about them was their working-class roots.

The lads from Liverpool grew up with very little in a town that is more Detroit or Pittsburgh than glitzy Manhattan or LA. These were not the kids of privilege by any stretch of the imagination, with the only member who grew up middle class being John Lennon.

What I always found intriguing is how the perceptions differ from the reality of the Beatles and their chief contemporaries, the Rolling Stones.

Most rock fans view the Rolling Stones as the gritty tough band while the Beatles are perceived as the artsy band. But the reality is the Stones hailed from the art schools and universities in and around glamorous London while the Beatles came off the hard-knock streets of Liverpool.

The Rolling Stones embraced wearing the black hat in their marketed persona while the Beatles remained true to who they were through their journey. Image through effective marketing can supersede the reality. If we know it to be true for companies, individuals, and brands, then it is certainly true for the performing arts.

So, when it comes to the four members of the most influential group in the history of rock, how would one rank them individually? Well first, you need to define the criteria.

First, let’s stick to the music. We won’t delve too deeply into the cultural, political, or social views and activities of the Fab Four. If nothing else, doing so saves us the torture of having to assess the impact of Yoko.

Second, the musical contributions of each member when in the Beatles as well as their solo work will be fair game. After all, it is amazing to consider the group was only in existence for ten short years, from 1960 to 1970. An amazing amount of music was created over that decade.

But the four continued to make music beyond the 1970 breakup, with the surviving members doing so to this day. Thus, we must include the solo catalogues in the ranking.

So, how do John, Ringo, George, and Paul sort out and why? Let’s have some fun.

It is not difficult to determine which member deserves the top spot; it’s not even close. Paul McCartney is from another planet.

Consider some of his signature creations for the Beatles: Paperback Writer, Helter Skelter, Can’t Buy Me Love, Penny Lane, Let It Be, Hey Jude, and Yesterday to name just a few. One could argue that the Beatles would still be the most influential group in rock history if you removed any member’s contribution from the catalogue, except for Paul’s. He is the most indispensable ingredient of the Beatles.

Yet Paul’s solo work may be more impressive than his time with the Beatles. Who doesn’t love Wings? Every time someone too young to remember the Beatles but old enough to remember AM radio hears With a Little Luck, Silly Love Songs, or Listen to What the Man Said, they are transported back to those summers riding in the back seat of the lead-gasoline powered family car with the windows down (pre-air conditioning).

My personal favorite McCartney tunes are Coming Up and Beware My Love. Best McCartney live renditions are Jet and Maybe I’m Amazed. And the guy just keeps on creating great music to this day.

George Harrison may have been the quiet Beatle when it comes to demeanor, but his music did plenty of bold talking. I love Taxman best, because of its political statement calling out government’s appropriation of citizens’ value by excessive tax. Amen to those lyrics in 2021.

George contributed three of the most beautiful songs in the Beatles portfolio with Something, Here Comes the Sun, and While My Guitar Gently Weeps. And he was a driving force to keep the group’s horizons constantly expanding, by immersing into different cultures and musical genres.

Harrison also lays a claim to arguably the best solo album of the four members after the breakup with his eponymous All Things Must Pass. That album holds the classics of What Is Life and My Sweet Lord. It also includes my favorite George single, If Not For You.

George was also a great collaborator, with his most notable mark being the founding father of the Traveling Wilburys. Imagine the studio where Roy Orbison, Jeff Lynne, Tom Petty, Bob Dylan, and George Harrison were putting together songs. Lightning in a bottle, captured by George and for the enjoyment of all.

I probably rank John lower than the critics and musical experts, which only makes me more confident I got it right. Lennon was great, no doubt. But also overrated in my humble opinion.

With the Beatles, Come Together, Strawberry Fields, and Help! are probably his most widely recognizable contributions. Much of his acclaim ascribed by the music press are for his politically overt numbers. Which is fine, unless you happen to disagree with some of Lennon’s positions. And most of those critically acclaimed Beatles songs don’t have the lyrical and musical weight that stick with you once you hear them.

As a solo artist, John struck gold with Woman and my favorite, Watching the Wheels (the latter was released posthumously after his murder). But his two most heralded solo singles, Imagine and Instant Karma!, I find immensely overrated.

I particularly find Imagine ridiculous; the hypocrisy of John sitting in his Manhattan palace or English estate while crooning about hunger, war, and greed is striking. Listen to the lyrics and then compare them to the Communist Manifesto: there is a lot of overlap between the two. Yet Rolling Stone magazine declared Imagine was Lennon’s musical gift to the world and hundreds of artists covered the tune though the years. Ugh.

It is testament to the power of the Beatles that the member I rank fourth (there is no ‘last’ with the Beatles) is a damn impressive artist in his own right. Ringo did not write the Beatles songs he is most famous for; that honor went to McCartney and Lennon. But you have to love his vocals on Yellow Submarine and With a Little Help From My Friends.

Ringo’s solo work is exceptional and underrated. Photograph and It Don’t Come Easy are my favorites. And he was, like George, a master collaborator. Ringo’s All Starr Band was an embarrassment of talent riches, with a lineup boasting Dr. John, Joe Walsh, Billy Preston, the Band’s Levon Helm and Rick Danko, and Bruce Springsteen’s East Street Band’s Nils Lofgren and Clarence Clemons. Wish I could’ve seen that group live back in 1989.

Speaking of his All-Starr band, here is a little trivia for you: Ringo and Joe Walsh are brothers-in-laws, with each one married to a Bach sister. Wouldn’t it be fun to have Joe Walsh over for a Thanksgiving dinner?

They All Shine On

What’s so clutch about the Beatles is that no matter what your musical tastes or preferences, there is a wealth of options to enjoy. You want rock? Call up Helter Skelter or Live and Let Die on your music app. Want mellow? Give Something or If Not For You a spin on the turntable. And if you want to explore these four trailblazers in different environments, check out the Traveling Wilburys or the All-Starr Band live albums.