The dog days of summer: when July arrives, lawns turn brown, and shade is at a premium. When driving around western Pennsylvania during this time of year, every now and then I come across a neighborhood yard sign or occasional billboard in front of a house of worship promoting the upcoming church fair/carnival. Seeing these signs triggers two simultaneous reactions: the placing of a smile of nostalgia on my face, but also a tinge of melancholy in my mind. Both are for something once special that looks to be increasingly a thing of the past.

What used to be as commonplace as lightning bugs during the summers of my youth in these parts has become a bit of a rarity these days.

Few kids today experience what was once the exciting week when the carnival hit the local parish.  And a multi-year hiatus resulting from the lingering hangover of mandated pandemic shutdowns seems to have not just dealt a death blow to many church carnivals, but perhaps ultimately to many parishes themselves.

That is a shame, because the demise of the church fair mirrors in many ways the erosion of religion, values, and community in America. 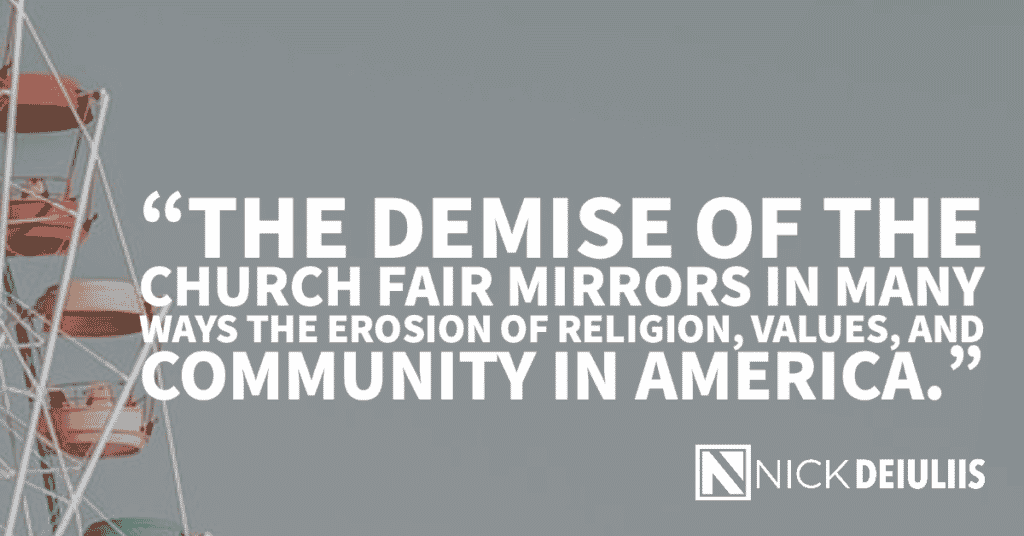 Not long ago, church was culture.  Pittsburgh’s neighborhoods and surrounding environs were a mosaic of different ethnicities and creeds.  With each turn at a street corner or summiting of a hill in western Pennsylvania, you would navigate through Slovak, Polish, Italian, African American, Jewish, Greek, Lebanese, and countless other neighborhoods and cultures.  Western Pennsylvania, built by an immigrant class, was the textbook exemplar of a melting pot.

And with each distinct culture came a unique house of worship.  The bricks and mortar of that house became the physical and spiritual centers of gravity for the local community.  Everything revolved around it, including schools, sports, cultural events, and schedules. Infants were born in its shadow, kids were schooled in buildings attached to it, people were married in them, and the deceased were eulogized in services hosted by them.  The house of worship was a reliable provider for the members of the local community from cradle-to-grave, literally.

The celebratory event that brought everyone together once a year was the fair or carnival.

Kids would anxiously mark the week months in advance.  Families would plan vacations to not conflict with the fair.  Extended families would participate in home-away pairings, with cousins from different neighborhoods attending each other’s fairs as hosts/guests.  People took pride and held rivalries within extended families and across communities in the quality of the carnival at their house of worship.

Thus, people in these parts took their neighborhood church’s fair as a serious endeavor. 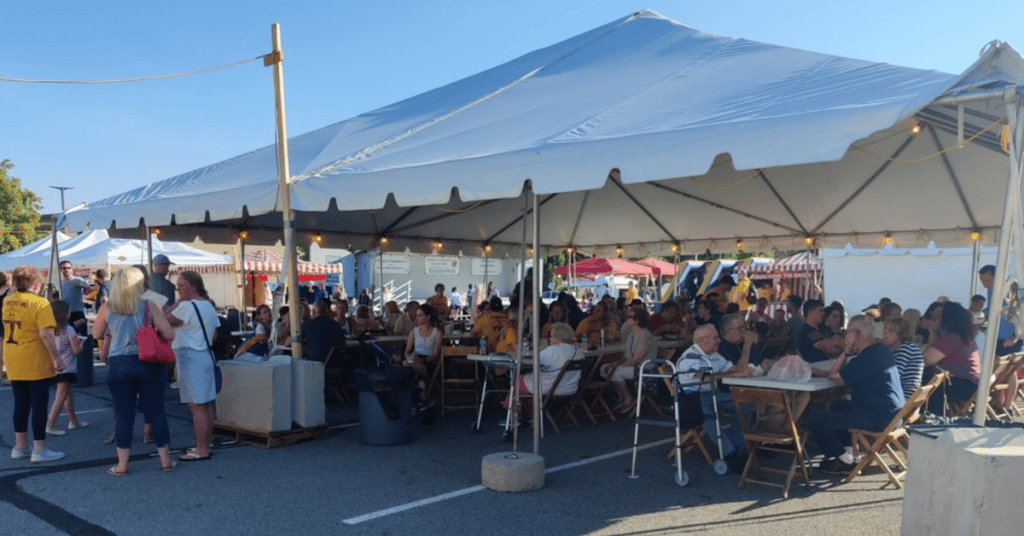 You didn’t volunteer to lead the planning and organization of the carnival or fair; instead, you were selected by earning your way to the spot over years of competently rising through the hierarchy.  In many instances, sons and daughters performed the menial tasks within the team that their fathers and mothers did when they were younger.  Those at the top of the ladder usually were not there by accident.  Strangely, a nonprofit institution had a way of instilling a highly effective meritocracy when event reputation and money were on the line.

Planning for the week of festivities was a perpetual process without end; as soon as the tents and rides were packed and shipped away, the leadership committee was off planning next year’s event.  That’s because the fair or carnival was a crucial piece of the financial viability of the church.  The proceeds funded the schools, paid for the capital improvements to the buildings, and underwrote many of the outreach programs for the local infirmed and poor.  With so much at stake, the house of worship applied a continuous improvement methodology that would rival the best practices found in the hospitality industry.  Overall event quality was the best guarantor of financial success.

Weather was an uncontrollable, yet critical, factor in the ultimate outcome of the year’s event.  A dry and rainless week virtually guaranteed a financial success, whereas dreaded rain would severely impair the financial proceeds.  The church fair taught you at a young age that events outside of your direct control could have an outsized impact on you and your tribe.  Weather was one of life’s ‘known-unknowns.’

Food: The Soul of the Fair

Every event was sure to offer the standards, such as hot dogs and pizza.  But then the ethnic nature of each church took over to offer custom items on the menu: pierogies at the Polish church, pastas at the Italian church, stuffed grape leaves at the Lebanese church, and so on.

Like those who planned, set up, and ran the event, the cooks and bakers for the fair were selected through merit; being a food contributor to the church carnival was a huge source of pride for the cook.  Some of the best food I ever had the pleasure of enjoying was at various Pittsburgh church fairs through the years.

The Ironic Reality of the Church Fair

The carnival taught every kid a new life skill:  how to gamble (and why you want to avoid it).  Games of chance were the biggest money maker for the event.  And the games were clinically designed to methodically procure income from young kids and adolescents.

Little kids would spend allowances saved up all summer to try to win that stuffed animal at the ring toss.  Teenagers would throw dollar bill-after-dollar bill earned from cutting lawns, babysitting, or delivering papers down on the table at the booth where the chuck-a-luck birdcages were rolling the dice.  Many young gamblers learned valuable lessons: the house always wins, you should quit when you are ahead (or not start at all), and the true meaning of ‘gambling is a regressive tax.’  The church had no problem profiting from its sin tax on the younger parishioners, and senior citizens parked at the bingo tables were also fair game.

Most fairs had rides for the kids.  They were not amusement park-caliber rides, but they got the job done, especially for the youngest of attendees.  A little duct tape here and there, some leaking fluids at certain spots, and maybe not up to current day regulatory standards.  But the rides put a lot of smiles on little kids faces, and happy kids usually means happy parents, which leads to higher attendance and longer stays.

But That Was Then – Today is Different

I see those signs announcing the upcoming event and think back to my days of youth running around the streets of Pittsburgh and western Pennsylvania to all those different carnivals and churches.  I remember them all and miss them more than ever.

What do I remember? The best ride was the Ferris wheel at the St. Mary of the Mount fair on Grandview Avenue in Mount Washington, which offered a million-dollar view at night for a $0.50 ticket.  The most fun was at the Resurrection parish fair in Brookline, where my brother and I would be invited to attend with our cousins.  The best prize I ever secured was a glow-in-the-dark Star Wars movie poster, which adorned my bedroom wall for a couple of years.  The best food…is impossible to say, like picking a favorite child.  You love it/them all.

Organized religions offer a mixed legacy, and many people are skeptical of them (author included). Yet this nation could regain much by refocusing on the values that the church fair and carnival epitomized.  Our local communities and national psyche need those values more than ever.

Tribute to the Church Fair